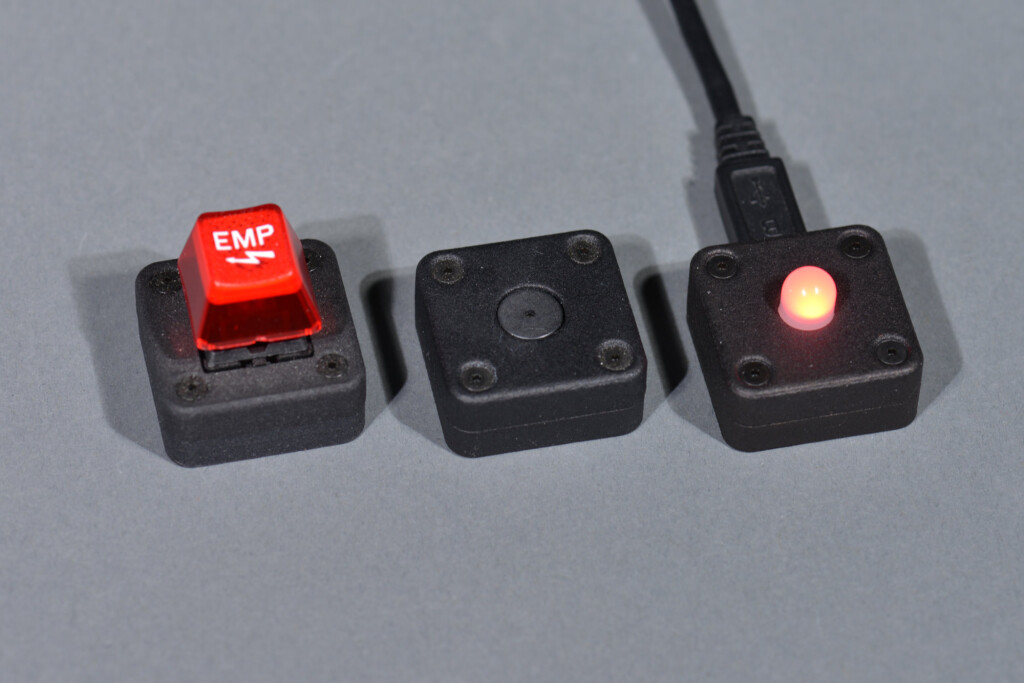 This is the third project in my series of near useless, single-purpose USB devices. The first device was a single-key keyboard that ostensibly could be used to replace the missing escape key on touchbar MacBook Pros. The second device was an annoying caps lock warning buzzer that would sound a tone to warn you if you accidentally engaged caps lock. We made a video about the caps lock buzzer at work.

For this project, I used the same PIC16F1459 microcontroller that’s used in the previous projects, but replaced the key switch and buzzer with an addressable RGB LED. Early in the design process, I experimented with using a WS2812b SMD RGB LED and several different possible lenses and diffusers. Ultimately I decided to use an APA106-F8 through hole RGB LED because its 8mm diameter translucent case negated the need for a separate diffuser and simplified the mechanical design.

I needed to prototype this project before designing a board because I wasn’t sure how the PIC16F1459’s USB software functions would interact with a blocking function bit-banging out the WS2812b protocol. Spoiler: it worked out fine! 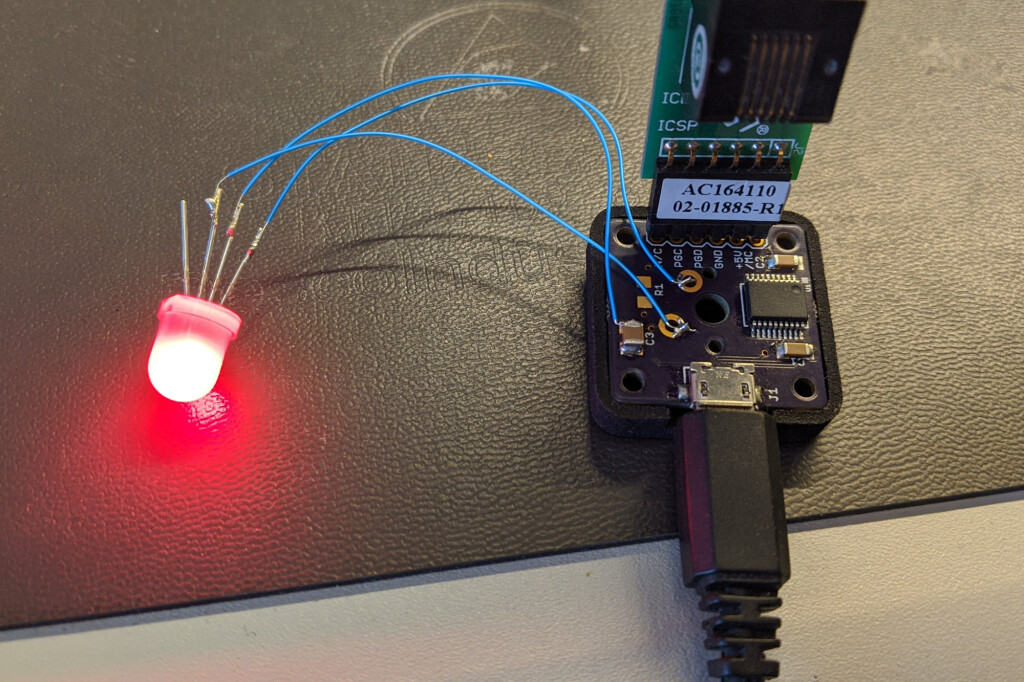 The prototype hardware with debugger attached.

Digging through a bag of old single key keyboard boards and parts, I found a board that was stuffed with all the components except the keyswitch. A quick check of the schematic and I found ground, +5V, and an easily accessible microcontroller GPIO pin on the board. I also had a bag of APA106-F8 LEDs left over from a previous project. I dug one out and tacked some blue wires between the APA106-F8’s leads and the GPIO, ground, and +5V points on the board.

Picking a Starting Point for the Software

For the software, I had two pieces of code that I could use as starting points. The first was the implementation of the USB CDC stack with a simple CLI for the PIC16F1459-based USB stack light controller. The second was a bit-banged implementation of the WS2812b protocol for the Ethernet-powered Christmas tree project. 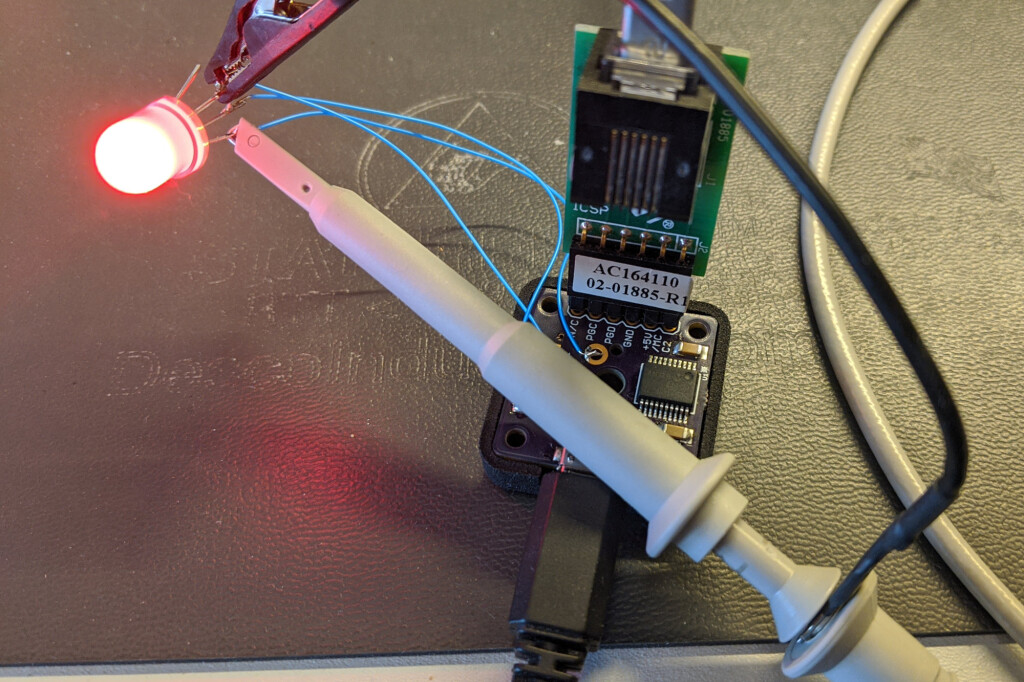 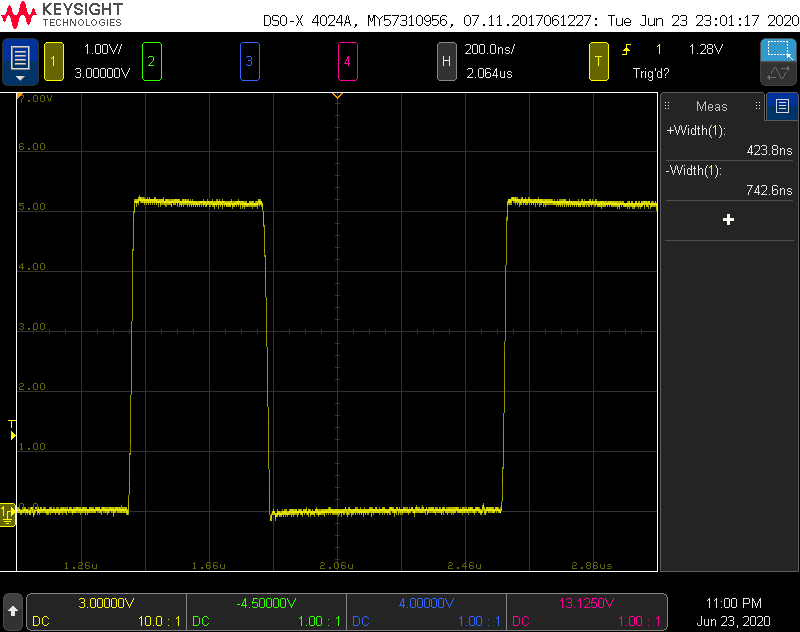 Timing for a zero. 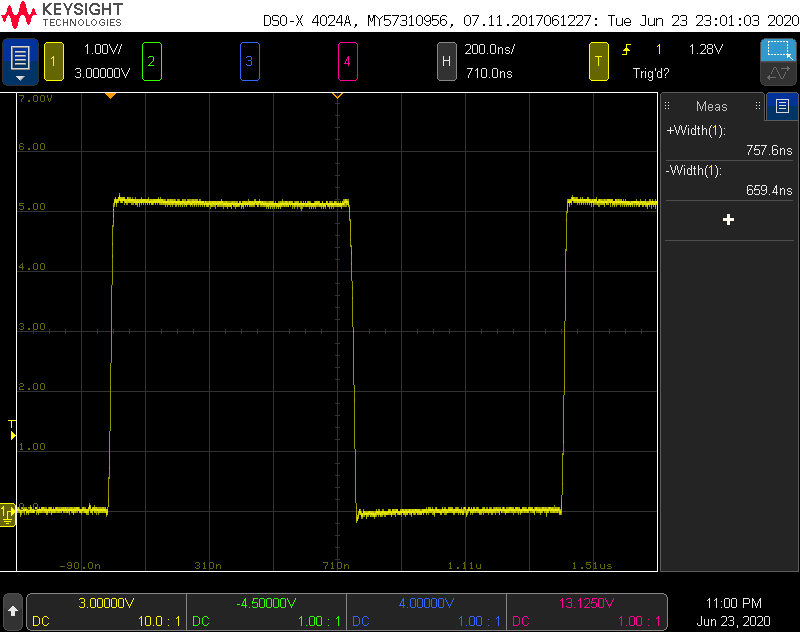 Timing for a one.

The scope screenshot above shows the timing for sending a ‘1.’ The high time is 757.6 ns and the low time is 659.4 ns. According to the data sheet, these should be 800 ns and 450 ns +/- 150 ns respectively. The high time meets the spec; the low time does not. Fortunately, WS2812b LEDs are not that sensitive to the low time between pulses, so this will work reliably 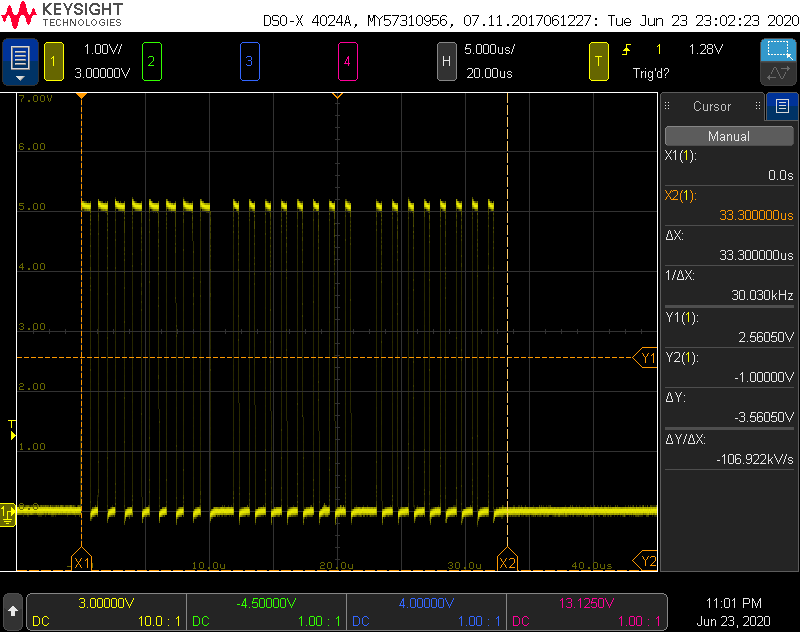 I started with the annoying caps lock warning buzzer as the starting point for the hardware for this project. 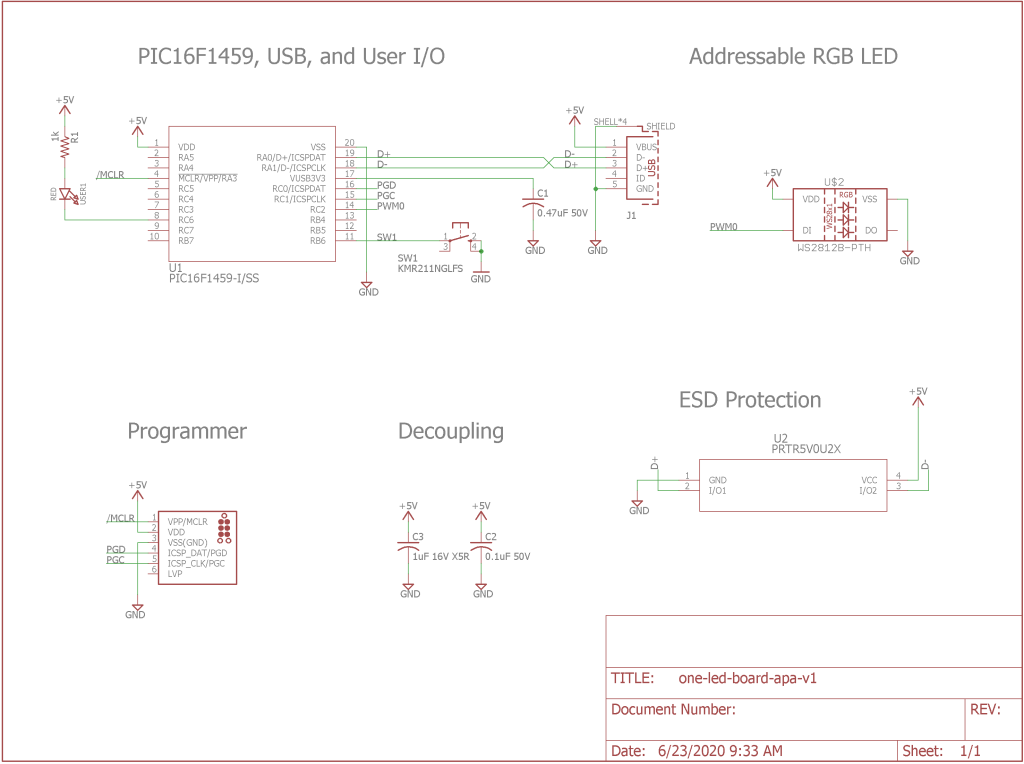 I copied the Eagle project for the annoying caps lock warning to a new project and made a few edits. The resistor, transistor, diode, and buzzer were removed. These were replaced with a single APA106-F8 RGB LED. The new schematic is shown above. 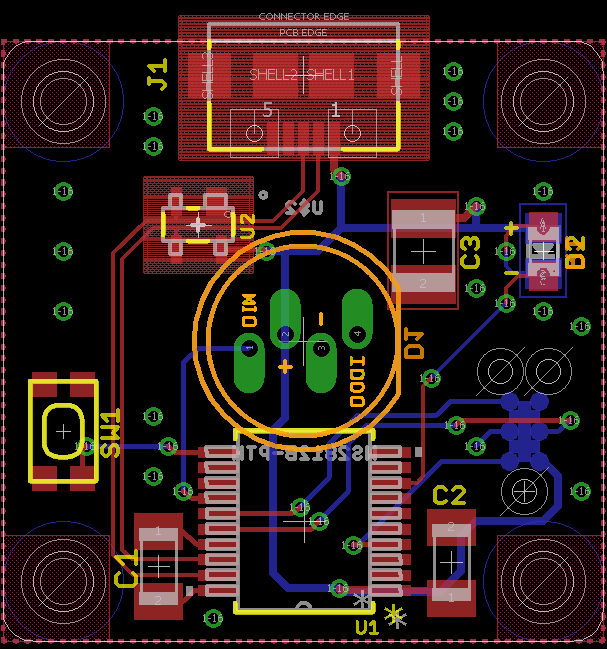 The completed board layout.

The board is identical to the board for the annoying caps lock warning buzzer except the buzzer, transistor, resistor, and diode have been replaced with an APA106-F8 LED. I started with the footprint for the APA106-F8 LED from a SparkFun LED library but reworked the location of the pins, part origin, and device outline to reflect reality. I also added signal labels to the silkscreen layers on each side of the board. I exported the Gerbers and uploaded them to OSH Park for manufacturing. 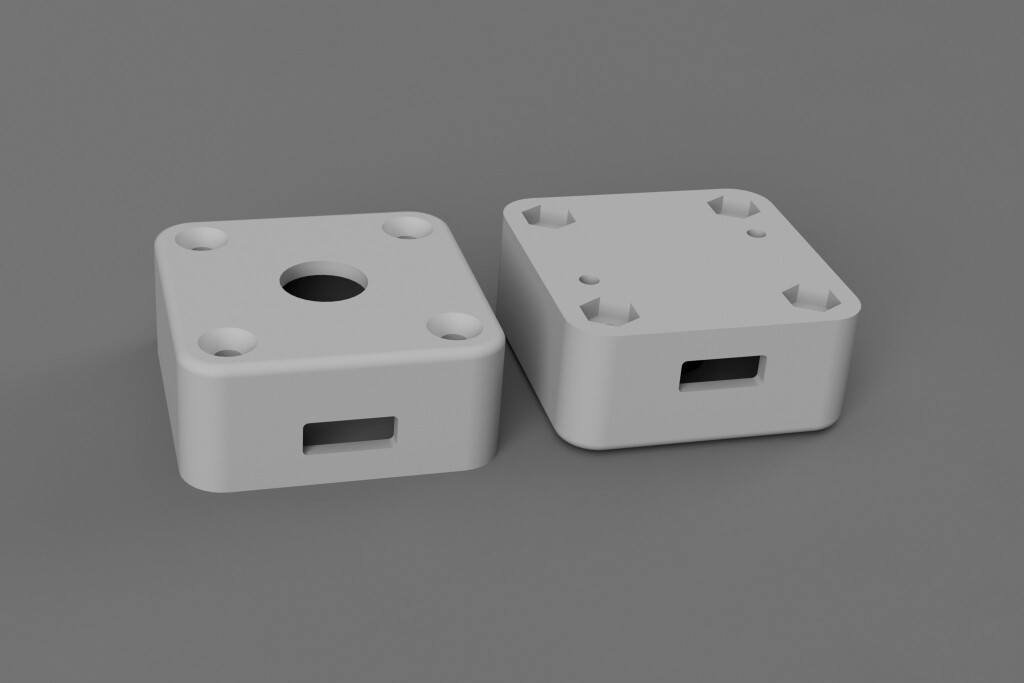 The completed enclosure design. It’s the same as annoying caps lock warning buzzer except for the diameter of the hole in the center of the top.

The enclosure has a cutout for the USB connector, countersinks for the flathead screws, and recesses to accommodate hex nuts. On the bottom are two holes. One is for a status LED and the other is for a small pushbutton to force the device into bootload mode at power up for firmware upgrades. 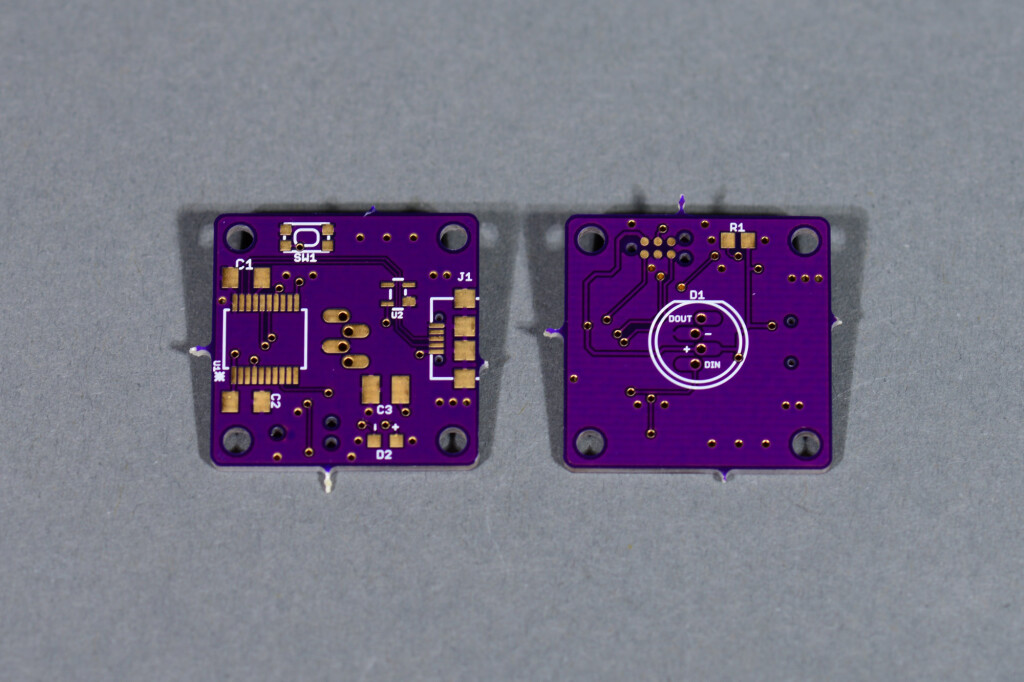 On Saturday, June 27, 2020, I received the completed boards back from OSH Park. 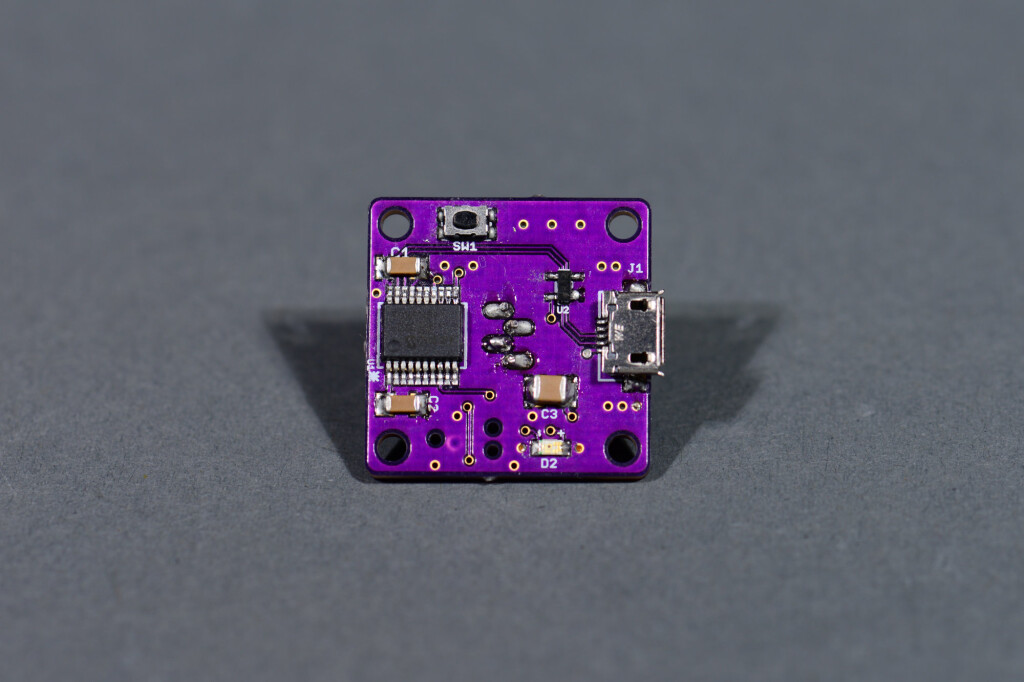 Saturday night I stuffed all the components on the board starting with the top of the board (which confusingly enough will be placed top-side down in the enclosure). 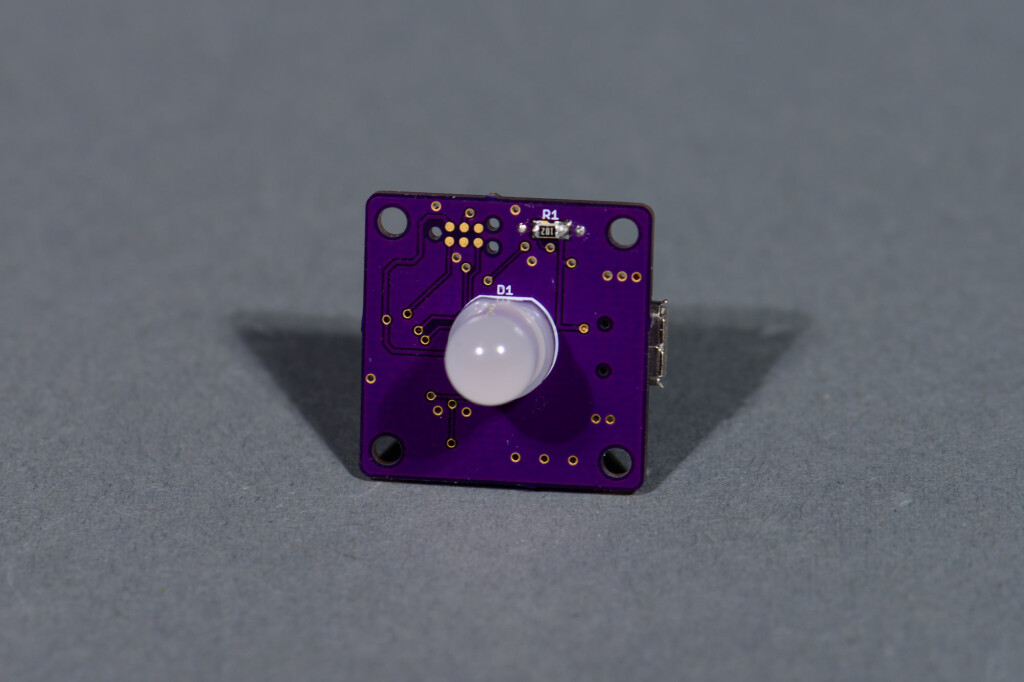 I then placed the 1k resistor on the bottom of the board and very carefully inserted, positioned, and soldered the LED in place. 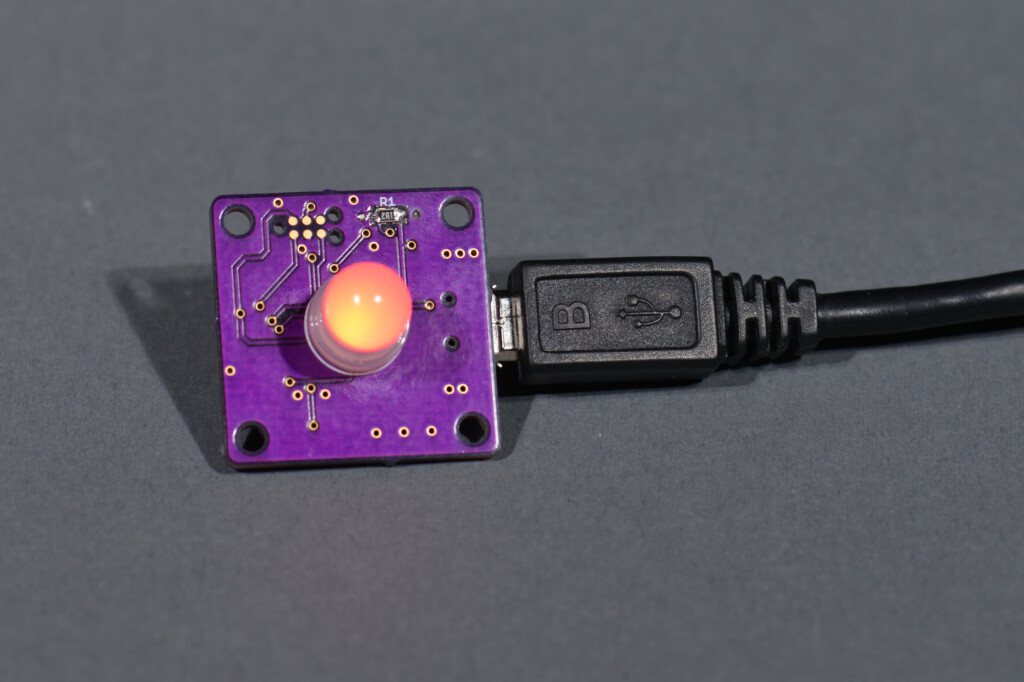 Testing the electronics before mounting them in the enclosure.

After building the board, I tested the board to make sure all was functional before placing it in the enclosure. The production board uses different GPIO pins on the PIC16F1459 versus the earlier prototype. I had to change the pins connected to the small button, the LED on the back of the board, and the main APA106-F8 LED in the software before I could do any testing.

Once these changes were made in the software, I connected the assembled board to a USB port on my computer and programmed the firmware using my MPLAB REAL ICE programmer and a Tag-Connect programming cable. I opened a terminal emulator to the board and could control the color of the connected LED. Success! 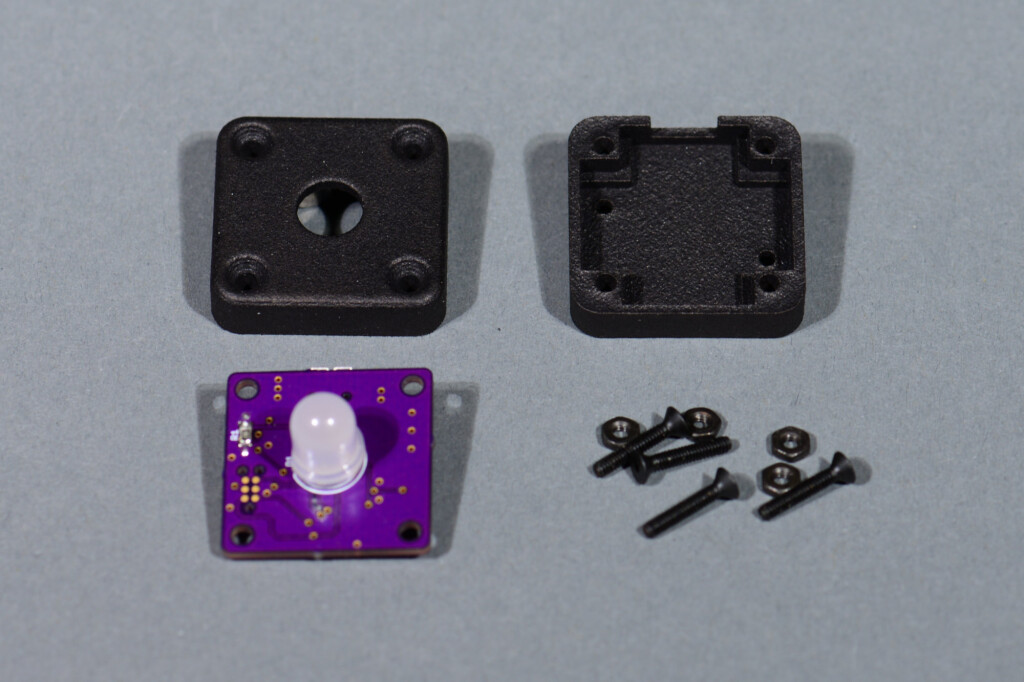 All the pieces for the project are about to come together. 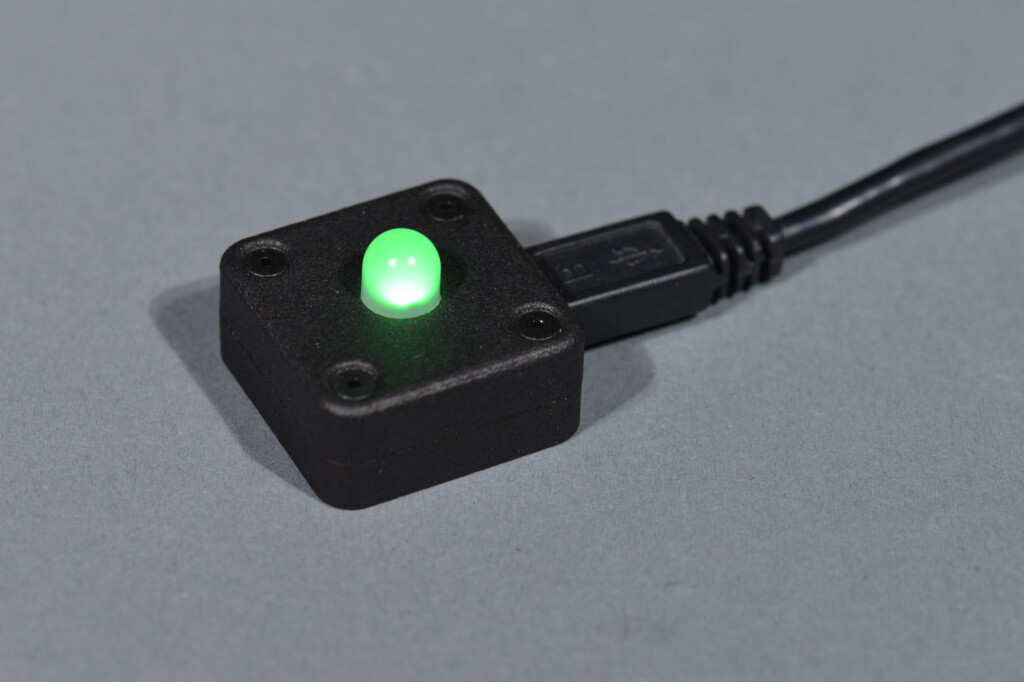 The completed and assembled project. 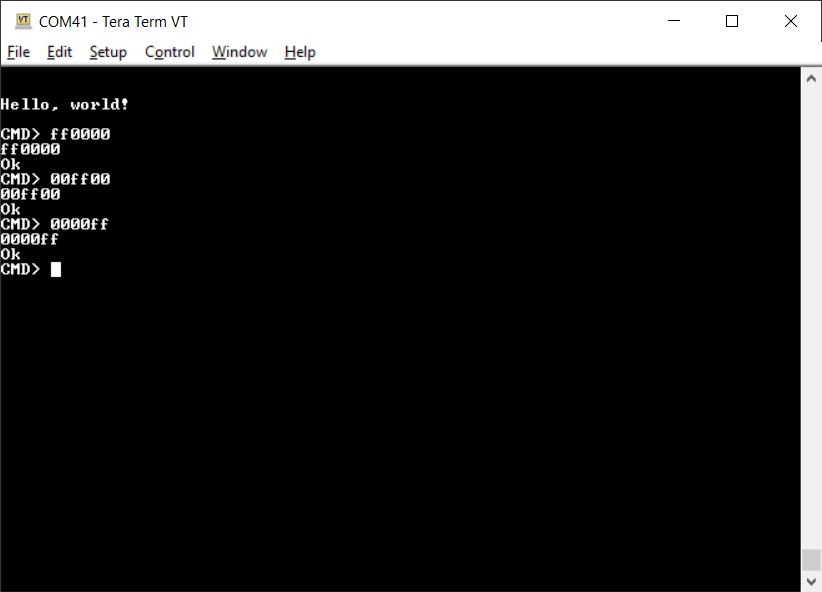 To test the single USB RGB LED, I used Tera Term to connect to the serial port assigned by my PC to the USB RGB LED. In this case, COM41. The bit rate doesn’t matter. It’s ignored by the CDC stack on the PIC.

To set a color, just enter its hex value a the CMD> prompt and hit return. If you make a mistake, the delete key can be used to back up and change your entry. If you still make a mistake, usually the worst that happens is you get an unexpected color.

Finishing Touches and Next Steps

I’d like to try adding a 100k pull down resistor on the LED data signal to see if this would keep the LED from lighting up on power up. I also need to flash the bootloader and rebuild the software to support the bootloader. This would permit software updates without having to disassemble the unit. Finally, I’d like to add a random blinking mode that would blink the LED random colors without intervention by the host PC.

The complete bill of materials for this project is listed below.

The software, board, and enclosure design files for this project are located in my single-usb-rgb-led repository on Github.

This entry was posted in Uncategorized, USB. Bookmark the permalink.