An animated GIF of the front panel lamps chasing each other across the panel. 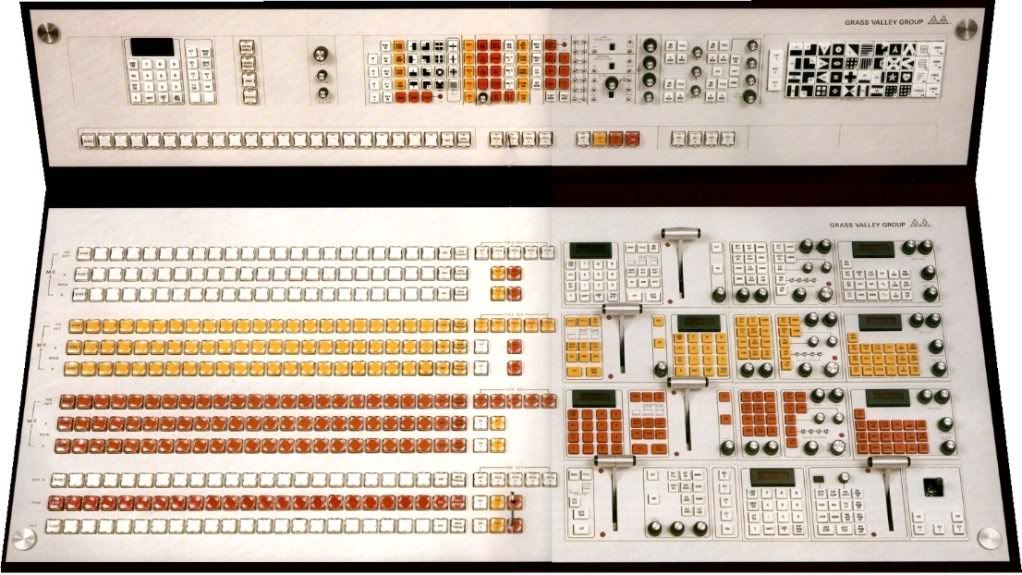 The panel reverse engineered and described in this blog post is the orange M/E-3 crosspoint swtich panel on the left side of the switcher and three quarters of the way down. The crosspoint switch panel is used to select three video signals from up to 24 different video inputs to feed to the first mix effects unit. Five additional key sources and the outputs from the M/E-1 and M/E-2 units can also be selected as inputs using the buttons to the right of the main 24 columns of orange buttons. The mix effects unit then combines these selected video sources into a live, mixed video feed.

A close up of some of the crosspoint panel’s source selection buttons.

On the crosspoint switch panel, each column of switches represents a different video source. These could be, for example, studio cameras, video tape recorders, still images from still stores, text from Chyron title generators, remote truck feeds, or satellite feeds. Each row represents a different input to the mix effects unit. The top row is the key input, the middle row is the A input, and the bottom row is the B input. The photo above shows the leftmost video sources on my crosspoint switch panel.

The buttons, knobs, and t-bar fader to the right of the crosspoint switch panel control the mix effects unit. Using these controls, the three video sources can be combined into a video feed like the one in the picture below. (I previously looked at the panel with the t-bar fader and converting it into a Halloween prop and USB peripheral in a video.) 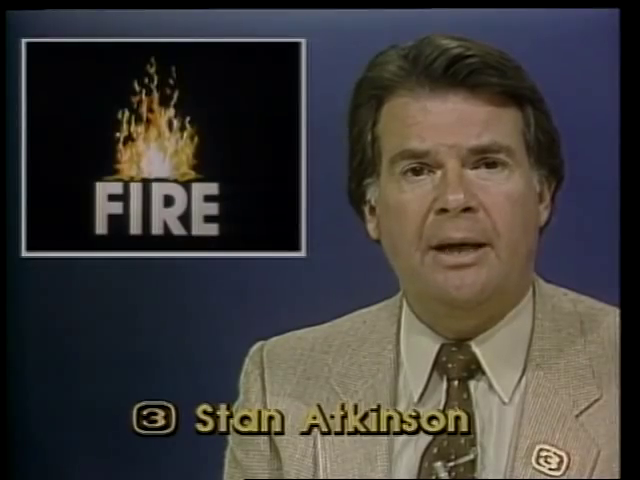 This image consists of three input video sources: the background consisting of the anchor and set, the fire graphic above the anchor’s shoulder, and the title graphics with the anchor’s name in the foregrond.

Once the M/E unit has been configured to mix the video sources together, the bottom three rows of buttons on the switcher can be used to select the M/E output for display on a preview monitor. Just before the anchor starts talking, the technical director can cut to the M/E output and display the live composited image on air.

The front of the crosspoint bus switch panel. Click to embiggen. 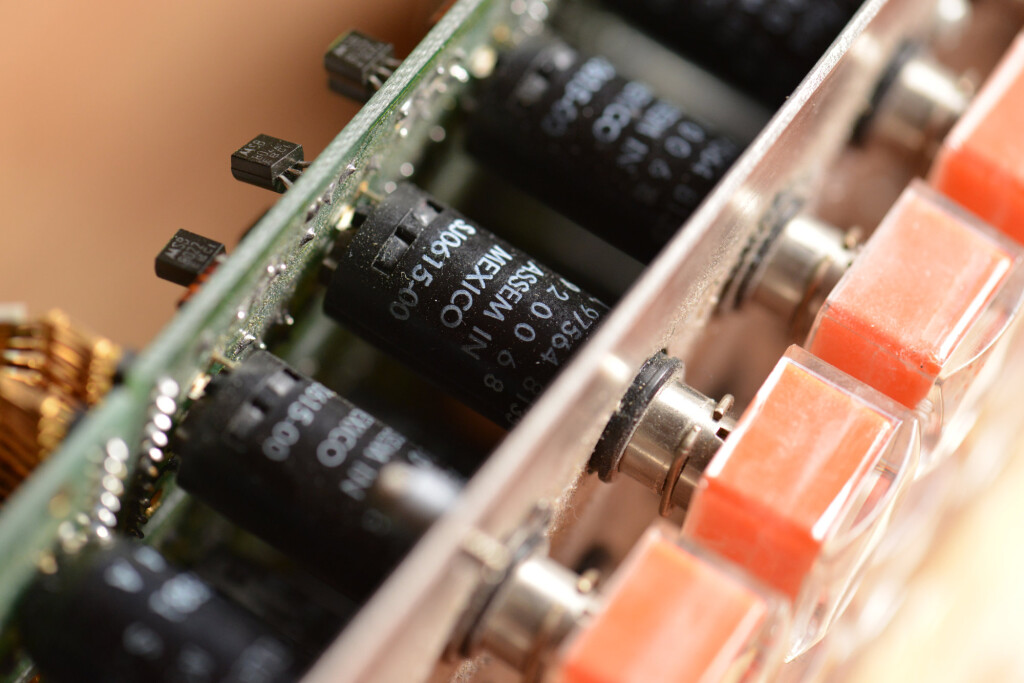 Close up one of the switches on the crosspoint bus switch panel. 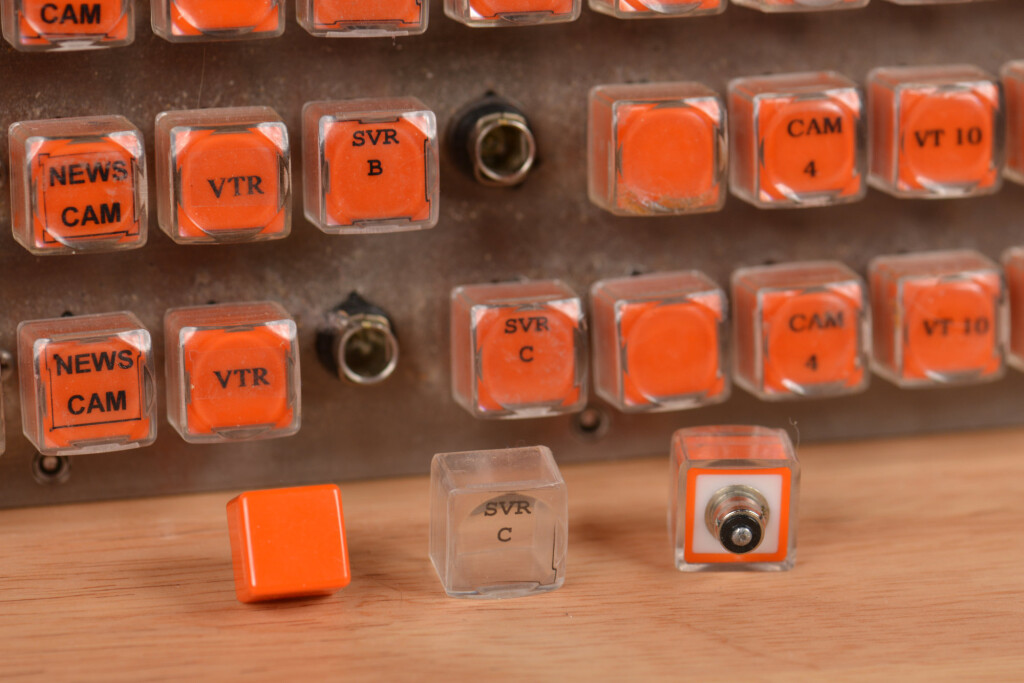 A few switches with their caps removed.

Each switch has an orange removable push button. The transparent cap can be removed from the button to insert a label indicating the video source assigned to that switch. On the rear of each button is a holder for a 12-volt midget flange base incandescent bulb.

The rear of the crosspoint bus switch panel. Click to embiggen.

Looking at the back of the panel, there are nine circuit boards. Each row contains three boards and each board contains eight switches. The boards within a row are connected together using jumpers connected between pairs of 10 position headers. The rows are not connected to each other. The headers at the far left are insulated using sparsely populated header sockets. The headers at the far right are connected to the main logic board of the video switch control surface. The nine boards are identical.

Reverse Engineering One of the Boards 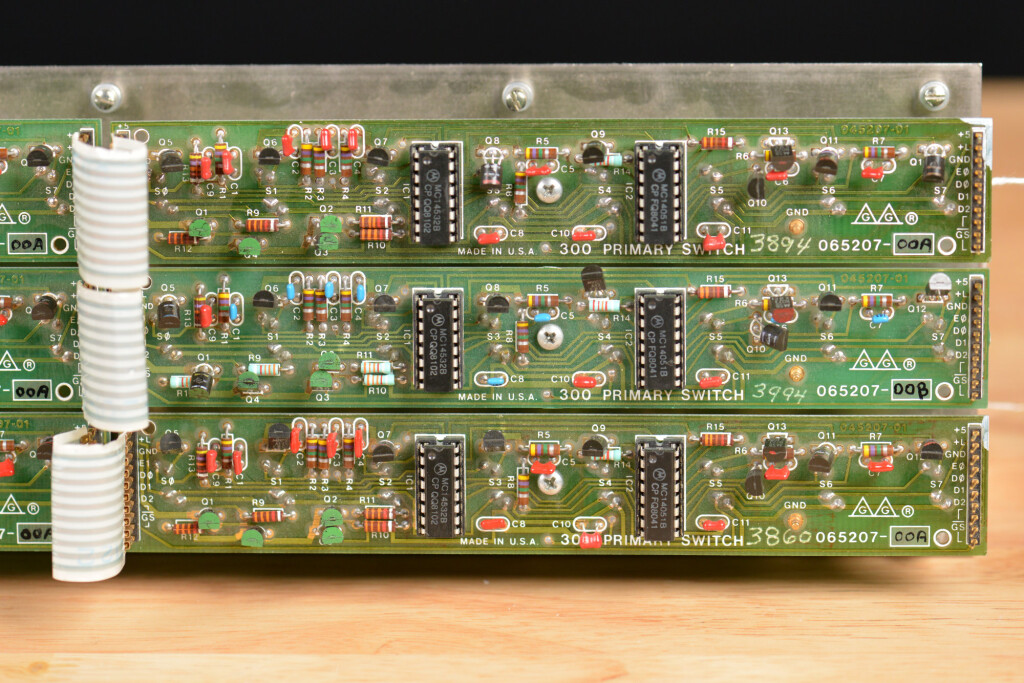 A close up of the electronics on the crosspoint bus switch panel. Click to embiggen.

The reverse engineering effort started with a quick examination of one of the nine boards, followed by the use of a digital multimeter to verify assumptions and trace connections between components. 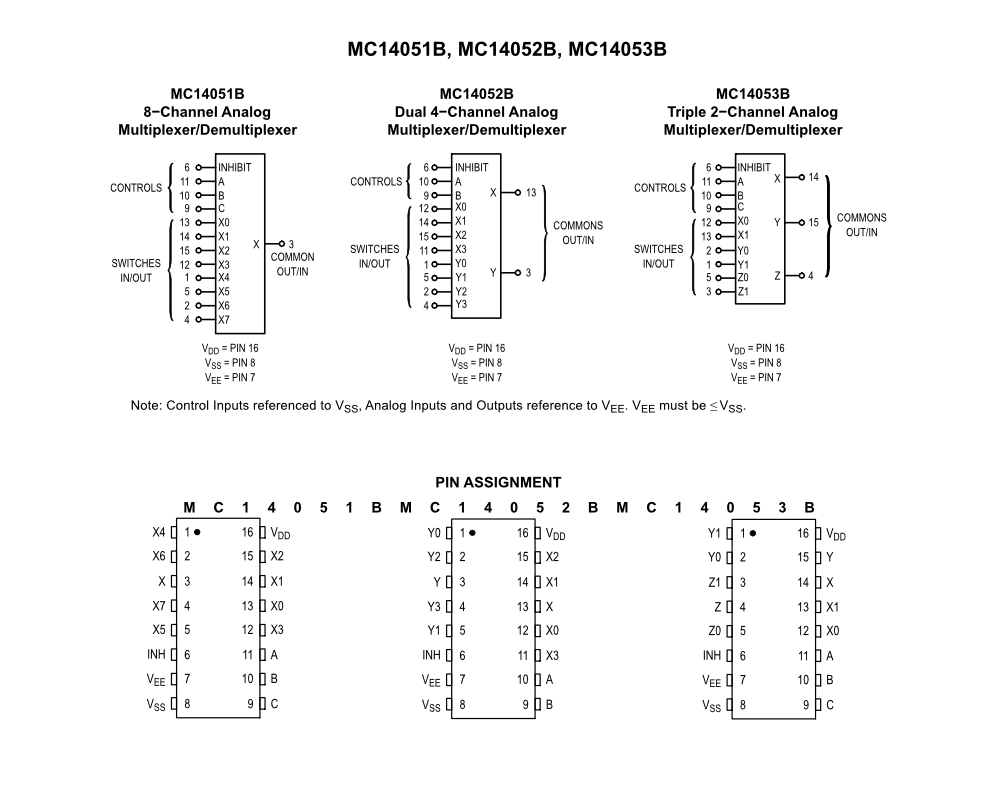 Functional diagram of the MC14051B analog multiplexer/demultiplexer from the second page of the datasheet. 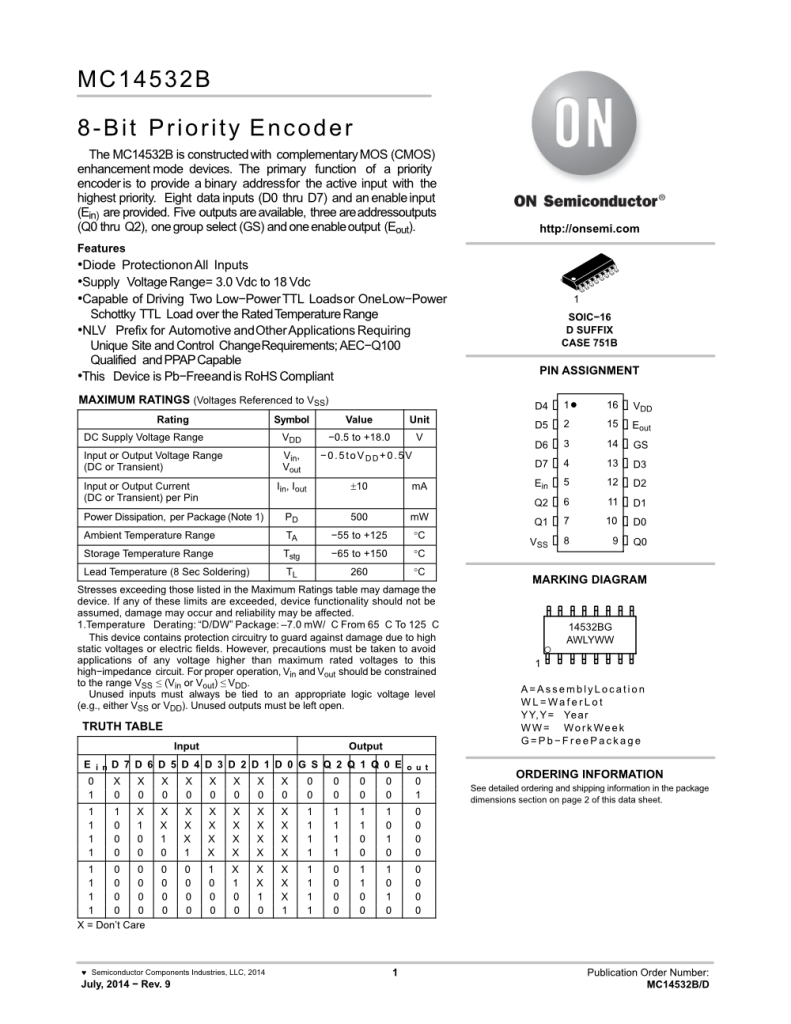 Front page of the data sheet for the MC14532B 8-bit priority encoder.

After tracing the analog multiplexer/demultiplexer connections, I turned my attention to the 8-bit priority encoder connections. The Ein  pin connected to the E1 pin on the left header. The eight D0 to D7 pins connected to the normally open terminals of the eight switches. The E1 pin is used to disable the encoder on this board if a switch is pressed on a board further to the left. Looks like the hardware can only detect one key press at a time.

These transistors form a simple wired-OR bus with the rest of the boards in the row. They permit any of the boards in a row to pull the signal low without causing contention. Pullup resistors are then needed on the main controller board to keep these lines high when no board is pulling the lines low. 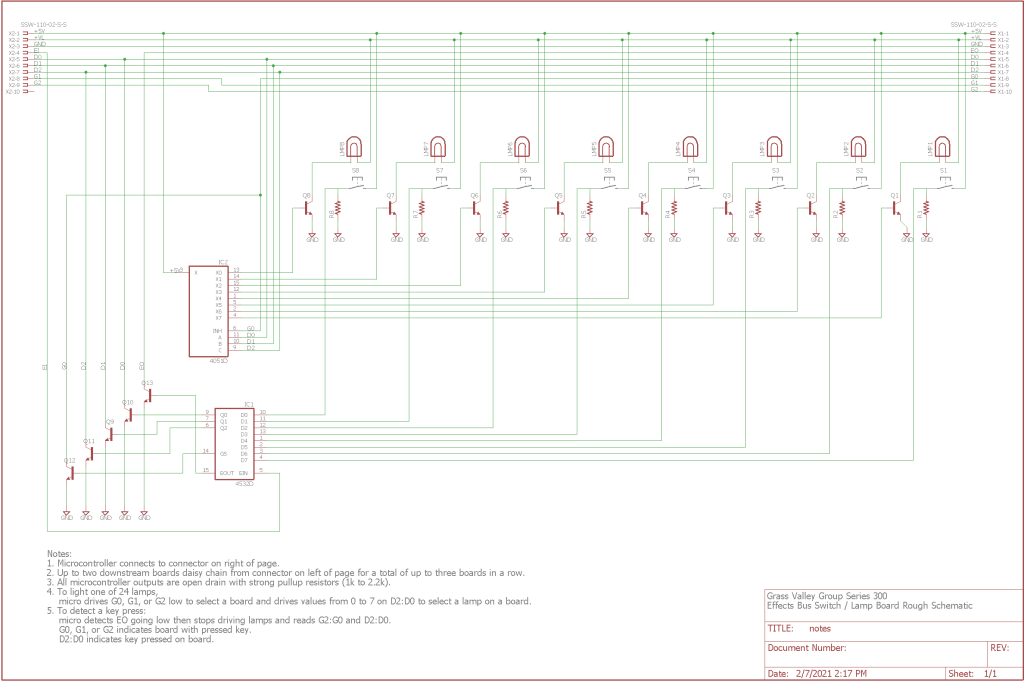 A very rough schematic of one of the eight push button boards. Reference designators are completely wrong and the resistor on the base of the transistors are missing.

After about an hour of making hypotheses, testing them with the DMM, and taking notes, I had the rough schematic shown in the image above. The schematic is missing most of the passives, the reference designators are wrong, and I do not remember which switch/lamp is where on the panel. After thinking about it some, I’m pretty sure I have the X0-X7 connections reversed on the MC14051B in the schematic. It’s not perfect, but it’s good enough to describe the logic required to turn on a lamp or determine if a button is pressed.

Turning on a Lamp 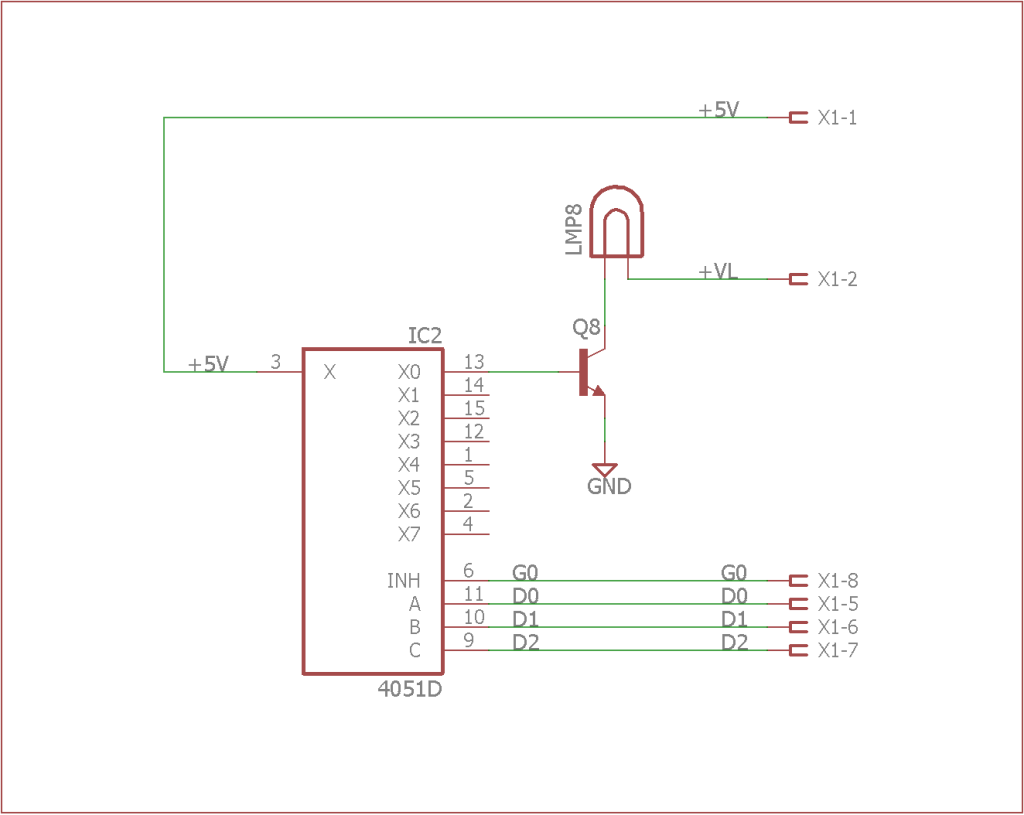 Simplified schematic for a single lamp. Setting G0, D0, D1, and D2 low will enable the demulitplixer and route five volts to the base of the transistor thus turning it on and allowing current to flow through and illuminate the lamp.

To turn on a single lamp, the system’s computer sets the Gx pin of the selected group of eight lamps low and sets the D2:D0 pins to the number of the lamp to turn on within the group of eight lamps. For example, to turn on the left most lamp (lamp 0) on the right most board (enable 0), the computer would pull G0 low while letting G1 and G2 float high and pull the three D2:D0 pins low.

This causes the INH pin on the analog demultiplixer IC to be low thus enabling the demultiplexer which routes the +5V on the X pin to the X0 pin based on the value of the D2:D0 signals. This biases the transistor and turns on the lamp. (All the signals on the headers use pullup resistors located on the system computer board to ensure lines not driven low will be pulled high.)

Simplified schematic for a single button. Pressing the button will pull G0 low then drive D2:D0 with the ones complement of the D2:D0 outputs of the priority encoder.

For example, if the left most key on the right most board is pressed, the priority encoder will drive it’s EOUT and GS outputs high and the transistors will pull the E0 and G0 lines low signifying that a key on the rightmost board has been pressed. The encoder will also drive a 7 on the Q2:Q0 outputs. This turns on all three transistors thus pulling the D2:D0 pins low indicating the leftmost key, key 0, has been pressed.

Here’s where things start to get interesting. What if a lamp is turned on and a key is pressed? In this case, the system computer and priority encoder are both pulling various combinations of the G2:G0 and D2:D0 signals low.

As a side effect, once the control computer is no longer driving its outputs, the lamp corresponding to that button will already be illuminated since the priority encoder is driving the enable and data signals with the levels needed for the analog demultiplexer IC to turn on that lamp.

At this point, the control computer can latch the key number, drive the signals to turn on the lamp corresponding to the key when wait for the E0 signal to go high then begin scanning the E0 signal for key presses again.

Due to the lamp and key press multiplexing schemes, this panel is really designed to only have a single lamp within a row illuminated at a time. This is consistent with the operation of the crosspoint switch in the video switcher because only 1 of the 24 sources in a row can be routed to a mix effects unit input at a time.

Controlling with a Modern Microcontroller 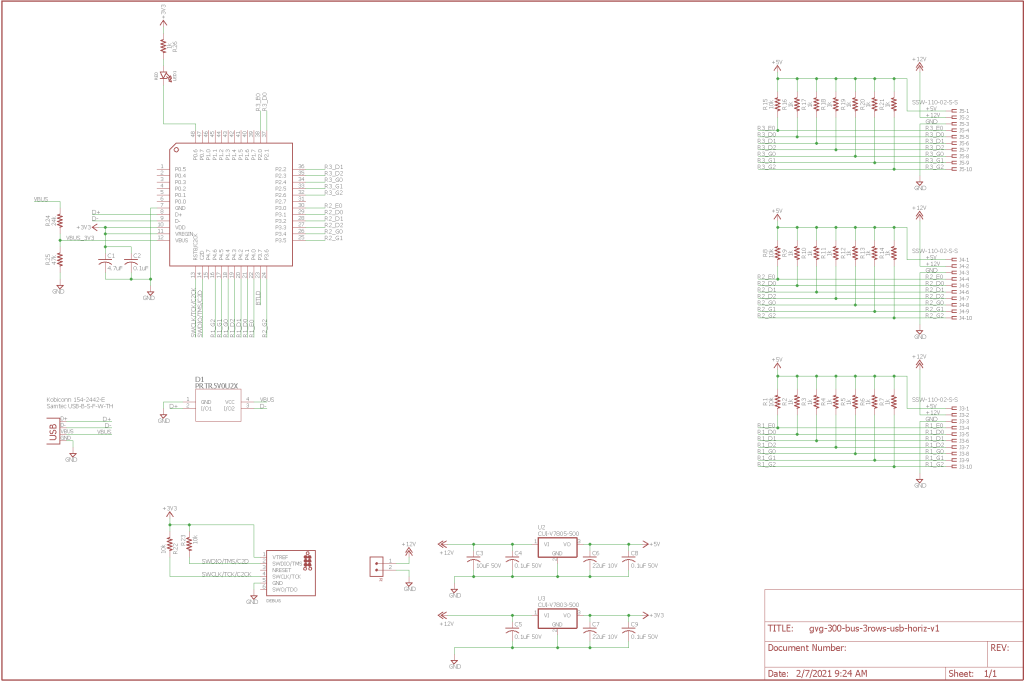 Schematic to control the panel using a modern microcontroller.

With the panel reverse engineered, it was time to try to control it using a modern microcontroller and turn it into yet another USB peripheral. The requirements for the micro were that it have twenty-one five-volt tolerant open-drain parallel GPIO pins and USB. The Silicon Labs EFM8UB2 series of parts easily fit this requirement.

Board Design, Fabrication, and Assembly 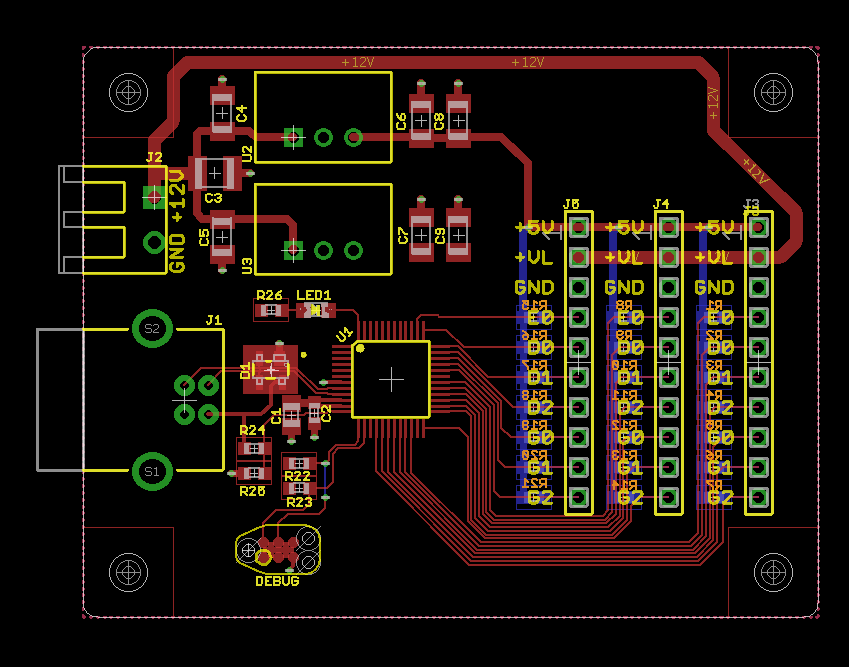 The completed board layout is shown above. The goal was to keep the USB traces as short as possible so that the impedance mismatch between the USB connector, the traces, and the microcontroller would not matter.

Board preview from the OSH Park board service.

Once the board was designed, I uploaded the gerbers to OSH Park to generate a preview and order the boards. 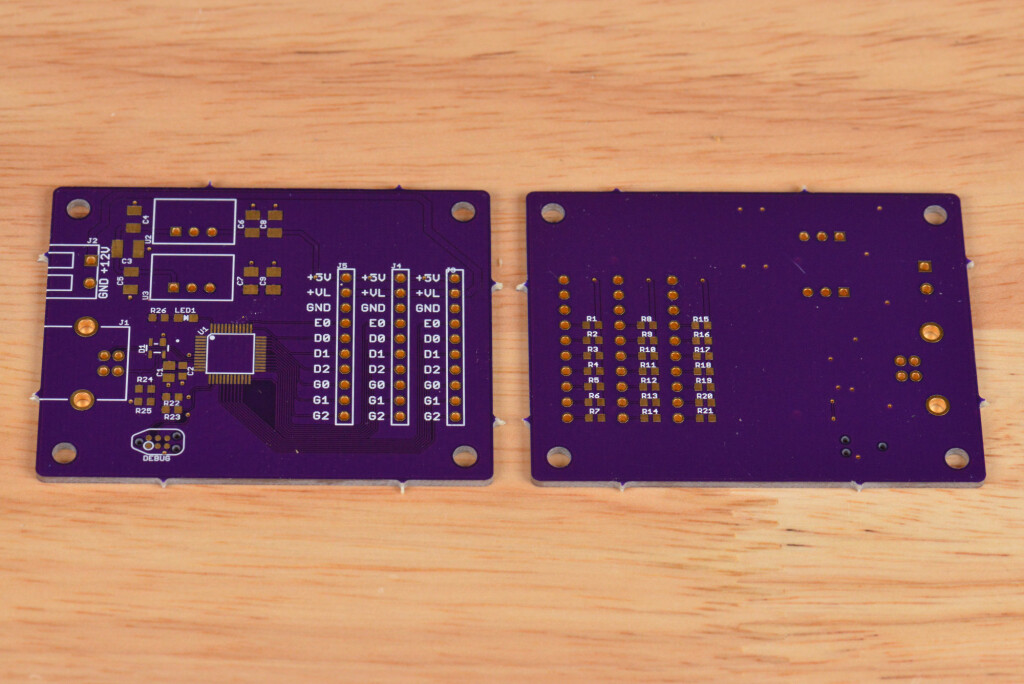 The unstuffed boards fresh back from fab at OSH Park. 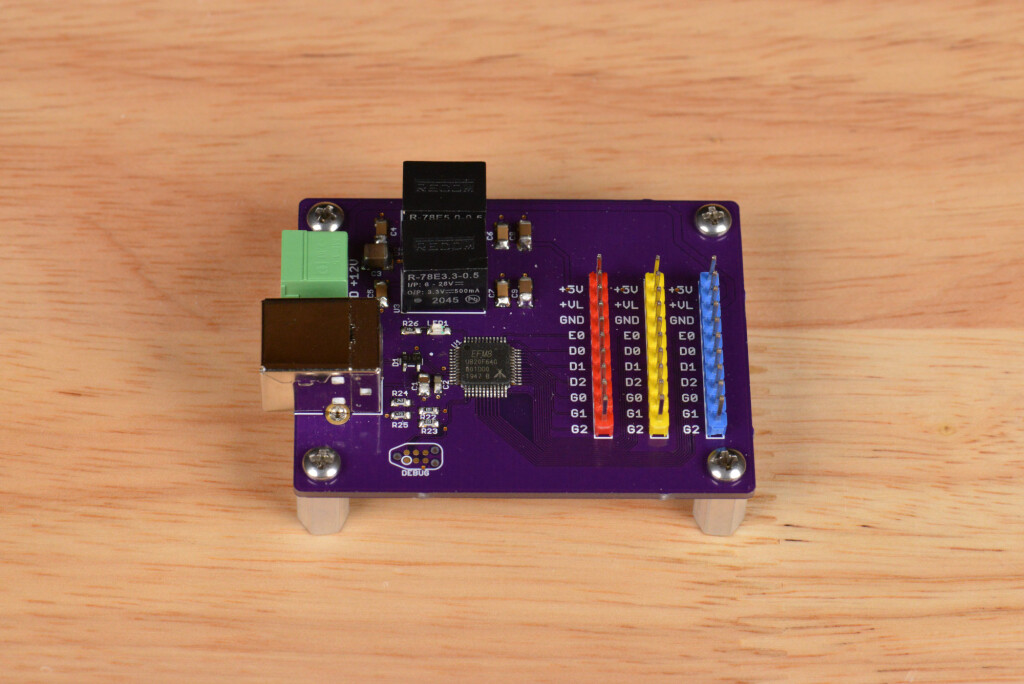 The assembled board. The red, yellow, and blue headers are a nice touch.

I procured the parts and assembled the boards. Soldering the 21 pullup resistors on the rear of the board really wasn’t that bad. The SMD resistors were definitely easier to solder than if I had used through-hole resistors.

The software for this board was a quick rewrite of the software used for the 300 Series transition logic board project. Most of the code was left intact with only the key scanning and lamp control code modified.

This is the code to scan the buttons for presses:

Each row has its own state variable and the code scans each row in succession. If the E0 pin is detected low, the micro stops driving the lamps in the row, waits a cycle around the main loop, then reads the key that is pressed from the G2:G0 and D2:D0 pins. This row and key are sent to the PC over USB. The lamps are also updated locally. The state machine then waits for the E0 pin to be detected high indicating the key has been released.

The lamp code is a bit less confusing.

The Windows Form GUI for monitoring and controlling the panel. It’s written in C# using the .NET framework in Visual Studio 2019 and runs on Windows 10.

The final step was to create a Windows 10 GUI to monitor key presses and control the lights. It’s very similar to the GUI I created for the analog panel meters project. Pressing a button in the GUI with the mouse colors the GUI button orange and sends a command over USB to turn on the corresponding lamp on the panel. Pressing a button on the panel, illuminates the button on the panel and sends a command to the GUI telling it to update the buttons on the screen.

This was a fun, quick project especially compared to the effort required to reverse engineer and control the Kalypso hardware.