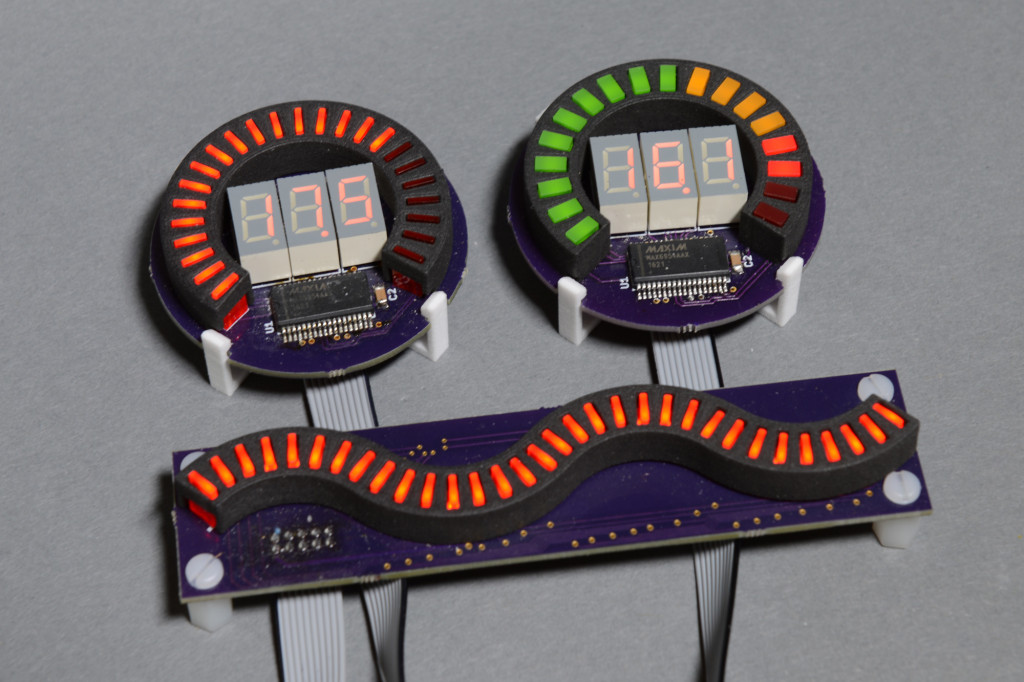 While building my zombie containment unit, I decided I wanted some LED displays or bar graphs to complement the containment status video running on the smaller secondary video monitor. Some other containment units used LED air pressure gauges from eBay. I wanted to achieve a similar look, but I also wanted my gauge to be software controllable so I could change the number of segments lit in response to events in the playback of the two videos. I decided it was time to build my own LED bar graphs.

My initial thought was to buy some pre-made curved bar graph segments and build my own board to hold them. Unfortunately, no distributors stocked these bar graphs and I  didn’t want to purchase the minimum order quantity of 500.

I decided to build a board to hold a bunch of discrete LEDs arranged in a circle and at the correct angles. Soldering them by hand and keeping everything perfectly aligned, however, was going to be problem. I also did not want light from the lit LEDs to bleed into the unlit LEDs. Fortunately 3D printing could solve both of these problems: a 3D printed holder could hold the LEDs while soldering them and act as a separator to prevent light bleed.

Picking LEDs and a Driver IC 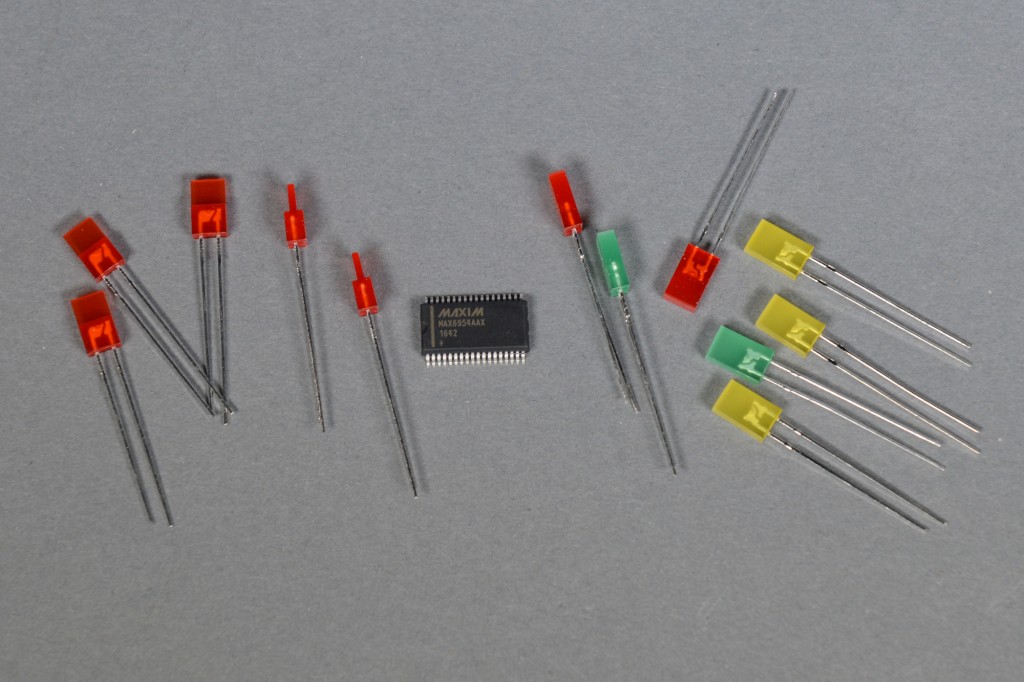 The first step is to pick some LEDs and a driver IC to drive them. I searched Kingbright’s website and settled on two possible LED candidates in three different colors.

The first LED was a 1 x 5 mm rectangular LED with a 2.8 x 5 mm base. I settled on the 625nm red version of this LED, part number WP1053IDT. Finding this LED in stock in green and yellow proved to problematic but I still wanted to do a display that used red, yellow, and green LEDs so I decided to build a second display with another LED too.

The second LED was a 2.5 x 5 mm rectangular LED. This LED’s dimensions are constant throughout its height. This LED was stocked in red (WP513IDT), yellow (WP513YDT), and green (WP513GDT) by a distributor too.

After searching for quite some time for a suitable driver IC, I finally settled on a Maxim MAX6954 common cathode LED display driver in a 36-pin SSOP package. This driver IC can drive up to 128 discrete LEDs, sixteen 7-segment dispays, eight alphanumeric displays, or some combination in between. It requires very little external circuitry and has a simple SPI interface for controlling the attached LEDs. Then I looked at the cost—about $20 each in single quantities. Ouch! But board space was at a premium and I wanted to add a few 7-segment displays to the graphs too so this IC was the perfect fit for the job.

After picking out the basic components, the next step is to decide on a board size, the number of LEDs on the board, and the radius and length of the arc that encompasses the LEDs. The 3D printing process imposes a constraint on these decisions: the minimum wall thickness in the selected 3D printing process is about 1.5 to 2mm so the LEDs can be no closer to each other at their closest points than about 1.5mm.

For the first three LEDs on the first board, I did the calculations by hand then moved and rotated the LEDs using the Eagle PCB command line. This quickly became monotonous and error prone.

Matlab to the Rescue Variables used by the Matlab script and their relationship to the final board layout.

To simplify these calculations, I wrote a Matlab script. When executed, the Matlab script sets a bunch of variables that control the spacing and position of the LEDs on the bar graph board, calculates the position and rotation of each LED, then generates an Eagle PCB script that will place the LEDs, draw a board outline, and draw some informational lines that show where each LED and the 3D printed LED holder will be located on the board.

The variables are as follows (see the diagram above for their relationship to the completed board):

With the Matlab script and generated Eagle PCB script, it’s pretty quick and easy to iterate through multiple designs in Eagle PCB and see how the LEDs will be spaced and placed on the board. Schematic with just the LEDs.

Select switch to board to generate a board from the schematic. It’ll look something like the picture below. Default layout after generating the board from the schematic.

Delete the default board outline from the dimension layer then run the generated Eagle PCB script using the File…Execute Script… menu option in the PCB layout tool. The board should now look something like this with all the LEDs, board outline, and dimensions placed: Board after LEDs, dimensions, and keep outs have been placed by the generated Eagle PCB script.

At this point, if you don’t like the placement of the LEDs, change the parameters in Matlab and repeat the process.

The final step is to add the rest of the components required by the design to the schematic and finish the board layout. Here’s my final schematic: And my final board layout: And the boards fabbed from the above files: I added some notches to the board outline to allow the boards to snap into a holder for either surface or panel mounting the finished displays: Board placed into a 3D printed plastic snap-in bracket for surface mounting.

I used Autodesk Fusion 360 to design the LED holder. The first step in creating the holder is to create a sketch matching the dimensions of the LED holder keep out area from the PCB board and with a hole for a single LED. We’ll duplicate the LED hole to all the required positions after extruding the sketch into a 3D body.

Some reminders of the required dimensions:

To create the sketch: Now add the hole for the LED: Location of rectangular cut out for one LED. Now create the 3D body and the required LED holes: Arcs on bottom of LED holder. LED holder with plastic removed to prevent interference with snap-in board holder. Verifying the fit of the circuit board, board holder, and LED holder in Fusion 360.

The final step before manufacturing the LED holder is to make sure the LED holder and the LEDs on the circuit board will fit together properly. To do this, I used ecad.io. After logging into the website, I uploaded my Eagle PCB board file and 3D models of the LEDs and other components obtained from the component manufacturers’ websites. Once everything was placed in ecad.io, I created a STEP AP214 Part File containing a 3D mechanical model of the board and components. Once the file was created, I downloaded the resulting .step file to my computer.

Back in Fusion 360, I uploaded the .step file and added the LED holder and board holder components to the model. I visually checked for interference but I could have also used the Inspect…Interference command in Fusion 360. Once I was satisfied with the fit, I selected the LED holder component and selected Make…3D Print. I set mesh refinement to fine and opted to save the .stl file to my computer rather than use the 3D Print Utility. Finally, I uploaded the .stl files to a 3D printing service and printed the models. To assemble the bar graphs, I soldered all the surface mount components to the board. After these were done, I stuffed the LEDs into their pads and placed the 3D printed LED holder over the LEDs. I then very carefully soldered the LEDs in place. After soldering all the LEDs, I removed the LED holder to see how they looked: No way the soldering job would be this neat without the use of a 3D printed part to hold the LEDs in place during assembly.

Here’s the assembled LED bar graph with the LED holder and board holder in place: In addition to the surface mount snap-in mounting bracket, I made a panel mount for the LED bar graphs: Panel mount. With a circular diffused gray translucent acrylic cover, this would look even better.

One of the coolest things about 3D printing your own bar graphs is that you’re no longer limited to mass produced bar graph displays in stock shapes. You can make your own displays in any shape you want. For my zombie containment unit, I made one circular red display and a 2nd display in the shape of a squiggle. I mounted both of these to an aluminum panel and stuck it to the front of the prop: This entry was posted in 3D Printing, Fusion 360, Matlab. Bookmark the permalink.