The only way to make CAPS LOCK even more annoying was to make it audible! Now never type a password in all upper case, join 500 lines together in vi, or turn a harmless forum post into an ANGRY SCREED without warning again! This project uses a PIC16F1459 to monitor the USB output report containing the CAPS LOCK status from the connected PC. When CAPS LOCK is enabled, the PIC turns on an annoying warning buzzer. Read on to build your own. 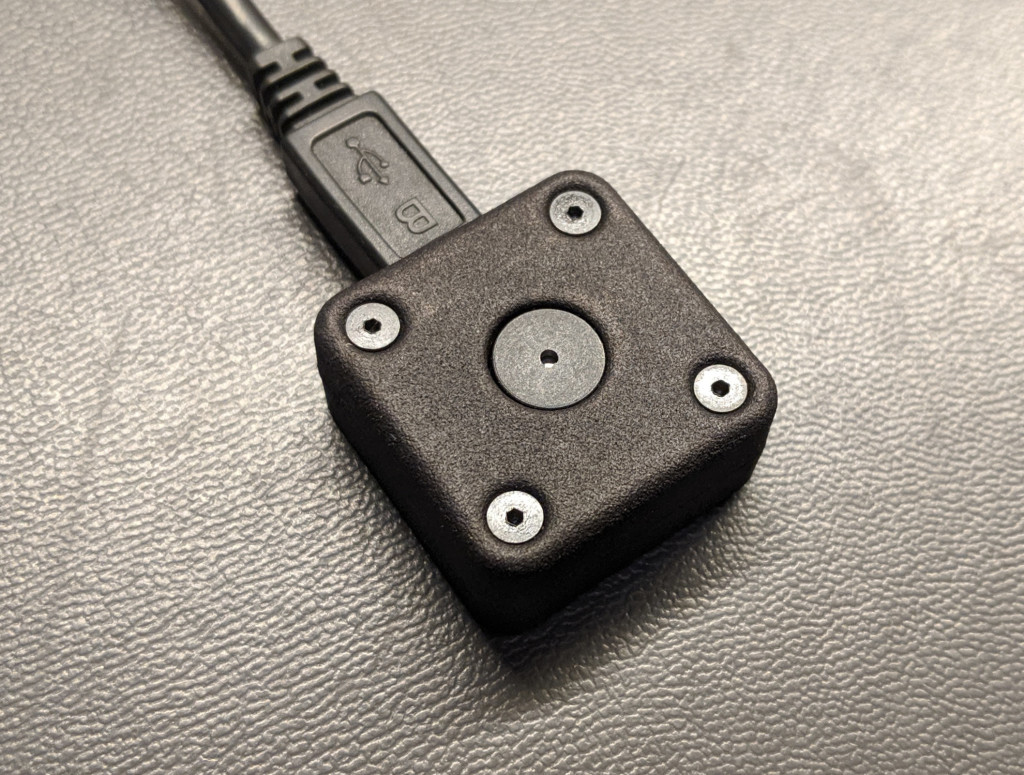 The CAPS LOCK key is the most annoying key on the keyboard. It’s always getting in the way. Ever enter a password with CAPS LOCK enabled? Enough times to get locked out of your account? Yeah, me too.

The only way to make CAPS LOCK even more annoying was to make it loud! As a side effect, you’ll always know when CAPS LOCK is enabled so entering the wrong password, joining lines when you’re just trying to scroll down in vi, or answering an entire email in ANGRY SCREED format should be history.

Derived from the One Key USB Keyboard 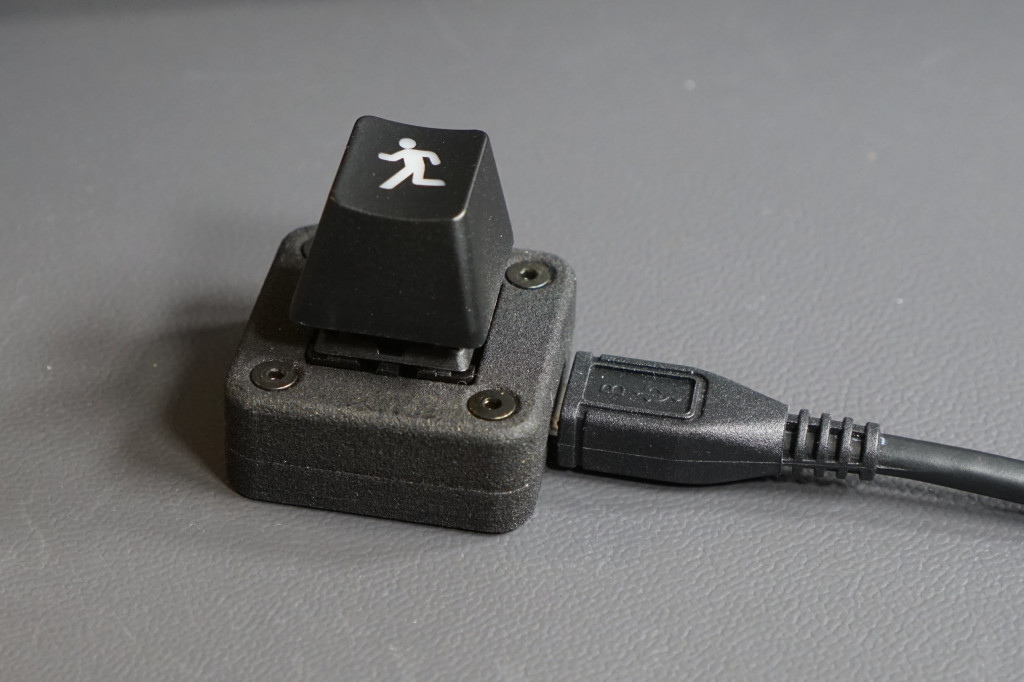 This project is almost identical to my one key USB keyboard project. The key switch and LED have been replaced by a transistor and a buzzer. The enclosure has a round hole instead of a square hole. The software previously turned on an LED when CAPS LOCK was set. Now it uses a different pin to enable the buzzer instead. A few small changes yield an entirely different result. The selecting parts section below is repeated verbatim from that design. Skip forward to the schematic section if you’ve already read it.

I chose a PIC16F1459 in an SSOP-20 package for the microcontroller. The PIC16F145x family provides a minimal parts count solution to implementing the USB 2.0 standard. No external oscillator is required because this micro has an internal 48MHz oscillator and uses active clock tuning to fine-tune the internal oscillator frequency to the recovered clock from the USB host. This micro, a USB connector, and three capacitors are all that are needed to implement a fully-functional USB 2.0 device.

Once I selected the microcontroller, I needed to pick a package for the microcontroller. The PIC16F1459 is available in DIP, SOIC, SSOP, and QFN packages. I chose the SSOP-20 package. The two larger packages were too big to fit in the allocated board space and the QFN package, though smaller, would be considerably more difficult to hand solder.

Next up was to find a suitable USB Micro-B connector. Since the entire board was to be hand soldered, I wanted a connector with locating pins to position the connector on the board while I soldered it and with enough room between the connector housing and the five signals pins that I could easily see what I was doing with a microscope. I ordered a bunch of USB Micro-B connectors, examined each of them, and finally found a Wurth Electronics connector that met my needs. 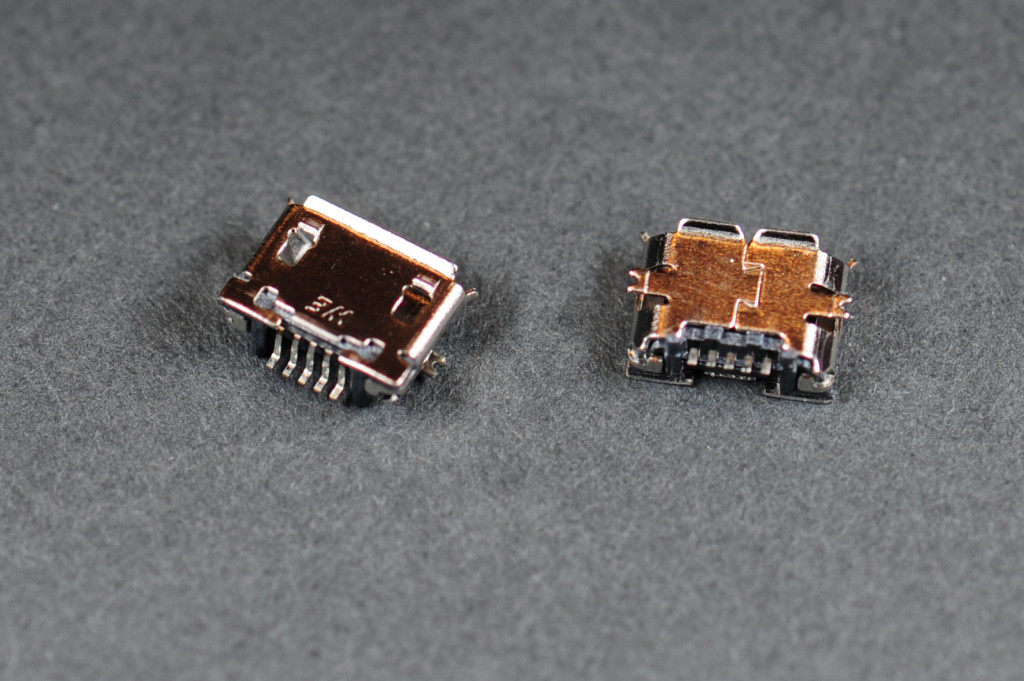 Wurth Electronics USB Micro-B Receptacle part number 629105136821. It has little black plastic posts to keep the connector centered while soldering and plenty of room between the shell and pins for the soldering iron, flux, solder, and inevitably, wick. 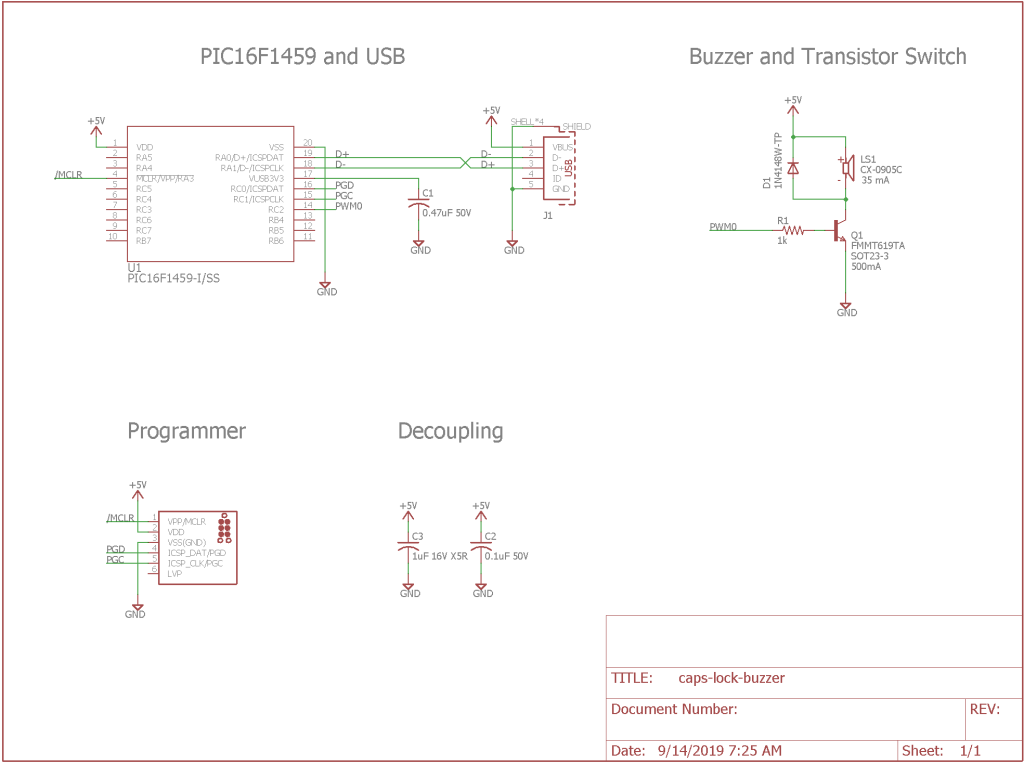 Pictured above is the complete schematic for the caps lock buzzer. Let’s take a closer look at the buzzer, the transistor switch, and programming the PIC16F1459. 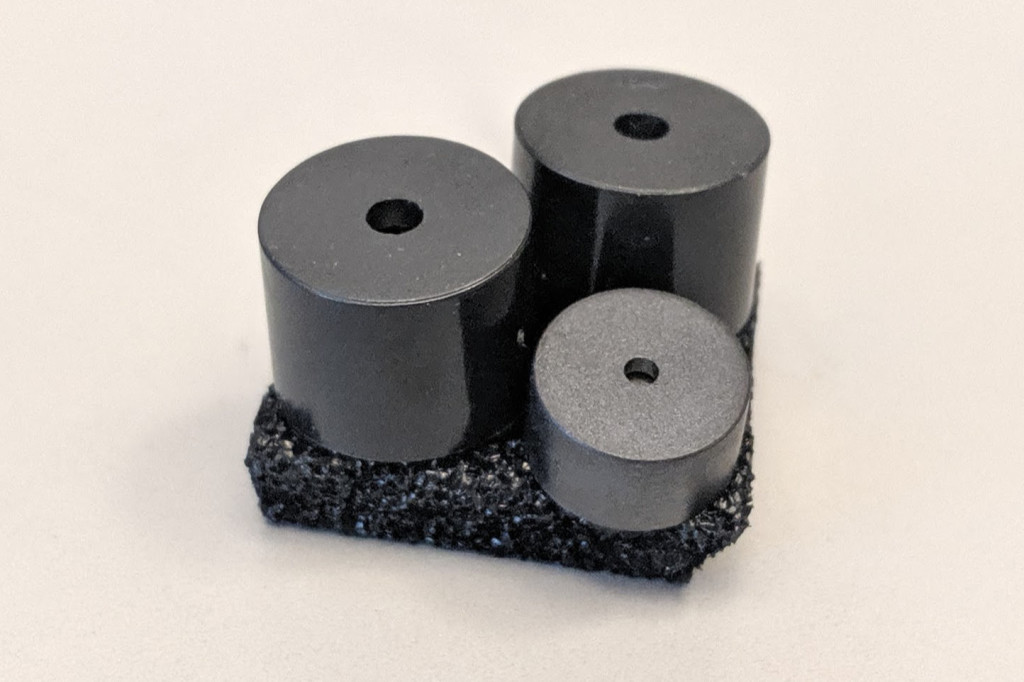 Buzzer candidates. I went with the smallest of the three.

The buzzer needed to run from 5V since that is the USB bus voltage. The current consumption needed to be less than 1 A to prevent overloading the USB bus. I selected a through-hole buzzer to make aligning the buzzer with the board and consequently the hole in the 3D printed enclosure simpler. The final criteria was to select a buzzer that fit in the existing one-key keyboard enclosure without protruding too much. I found a buzzer that ran from 5V, consumed 35 mA, and only protruded out of the existing enclosure design by 0.42 mm. The frequency is 2.7 kHz with an SPL of 80 dBA.

The transistor will definitely be operating in the saturation region when the PIC turns on the PWM0 output signal. We could use a higher resistor if we want to further minimize the heat dissipation of the transistor but 3.5 mA is much less than the maximum base-emitter current of the transistor and I have a lot of 0805 1k resistors in my parts box.

Diode D1 is present to protect the transistor from the flyback voltage generated by the inductive load of the buzzer when the transistor is switched off. The voltage that is created at the collector of the transistor will be safely sunk to the positive supply rail rather than building up to a level that could potentially destroy the transistor. 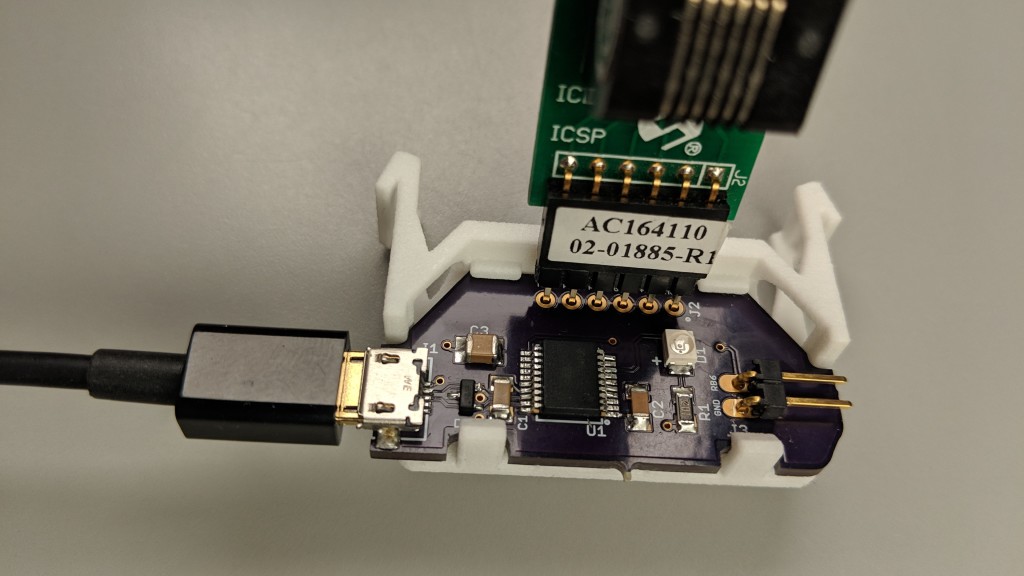 The old way of programming.

In previous designs, I’ve used a row of plated holes designed to make with a six-position, single-row, square-post, 0.1″ pitch header to connect to the PIC programmer and debugger (shown above). This works well but takes up a lot of area on both sides of the board. 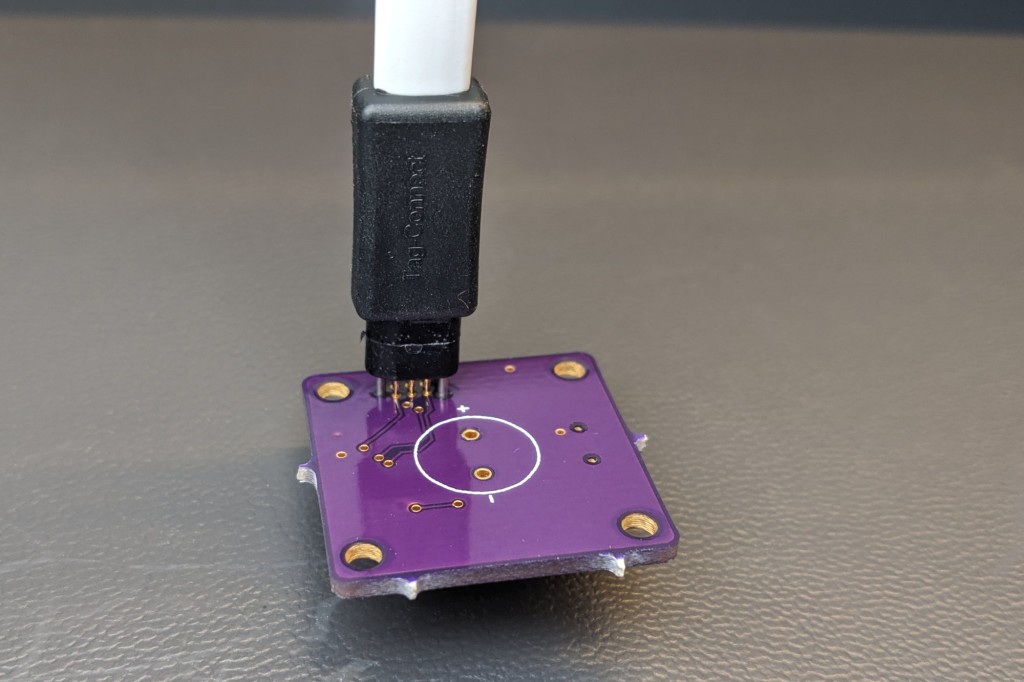 The new way: a Tag-Connect programming cable connected to the programming pins on the circuit board.

For this design, I’m using a TAG-Connect cable to connect the programmer/debugger to the board (shown above). This uses roughly half the area of the 0.1″ header and only requires holes for three small alignment pins.

A rendering of the boards from OSHPark.com.

Shown above is a rendering of the completed board design. The board outline is identical to the board outline of the one-key keyboard board outline. The layout is very similar as well. Note the footprint for the Tag-Connect programming cable to the left of the buzzer on the bottom of the board.

The software for this design is based on the Microchip Library for Applications (MLA) USB HID demo for low-pin count PIC micrcontrollers. In the unmodified version of the software, the software turns an LED on or off based on the USB output reports described in the previous section.

To make the annoying caps lock warning buzzer, I only had to change the pin used to turn the LED on or off from the default in the software to pin RC2, disable sending any pressed keys to the host PC, and recompile. 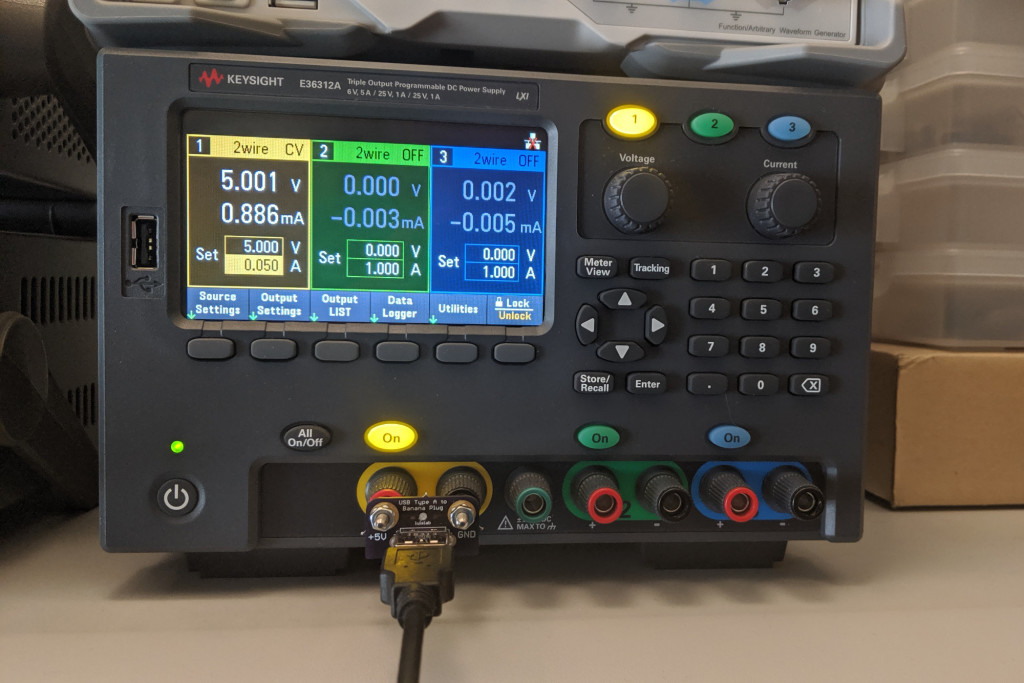 One milliamp with an unprogrammed microcontroller and the buzzer turned off is about right. It’s now safe to connect the buzzer to the PC without worrying about damaging the PC.

For the initial bring up and programming, I used a Keysight 36312A DC power supply and a double-banana plug to USB Type A adapter from Luislab (shown above). I set the DC power supply to 5 Volts and set the current limit to 50 mA. This way if I accidentally shorted power to ground while soldering or there was a defect in the board, the power supply would go into current limit mode at a safe limit rather than causing damage to the board or my PC.

The USB Type A ports on a PC are required by the USB spec to have a self-resetting PTC fuse on them to protect the PC against damage if the connected USB device or cable has a short or draws too much current. The trip point for the thermal fuse is 1 A. In theory, I could plug the board into my PC for the initial bring up but the PC’s USB port is really not designed to limit current. It’s a safer option for my design and my PC to use a current-limited DC power supply for the initial bring up than to use one of my PC’s USB ports or a phone charger.

Verifying the Transistor Switch is Operating in the Saturation Region 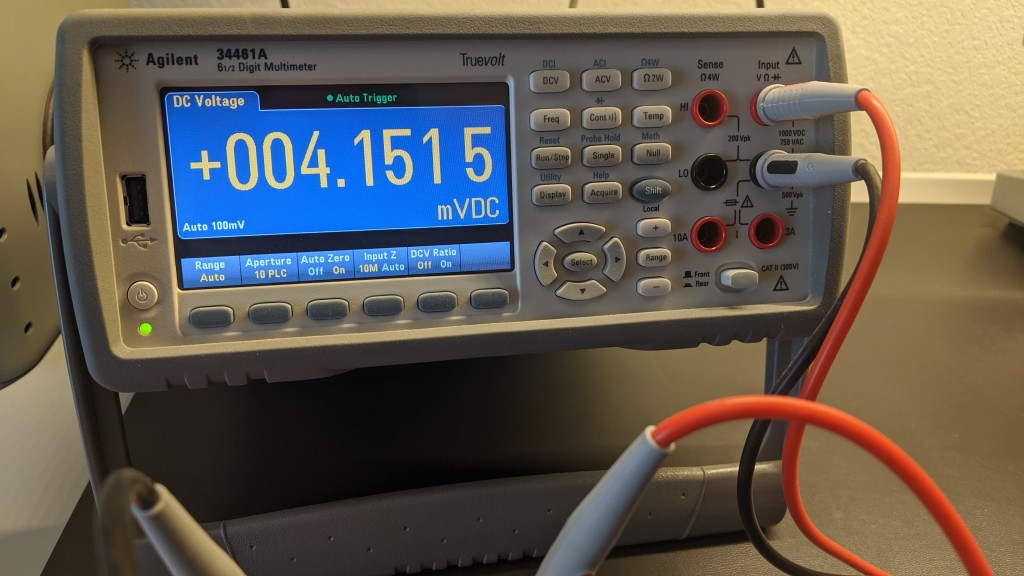 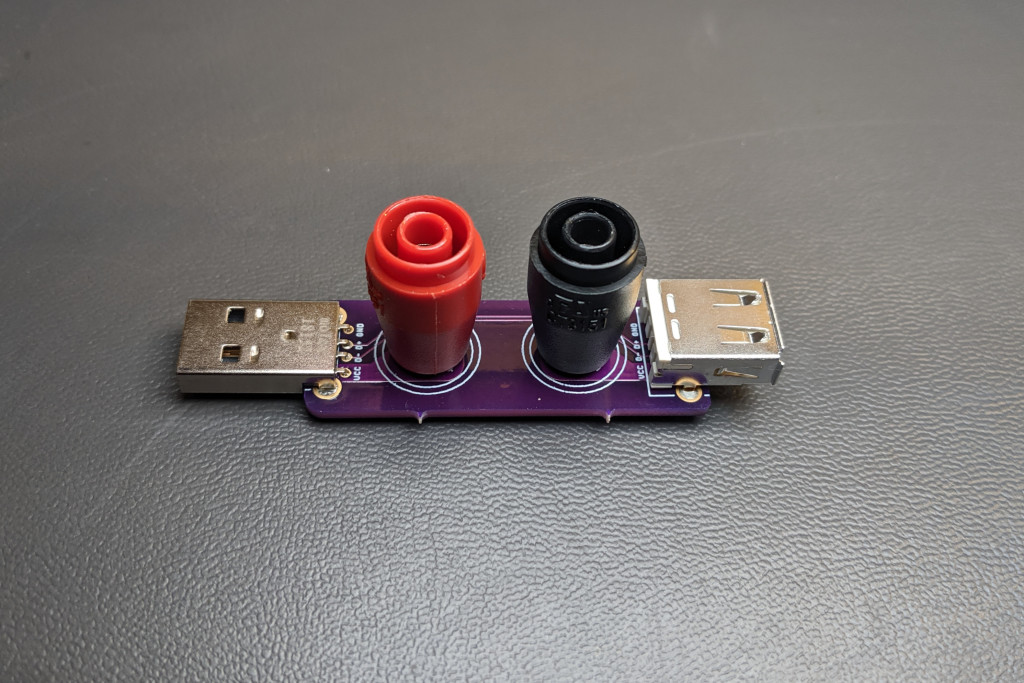 To measure the current I built a USB current probe board. This board connects the USB D+, D-, and ground lines directly from input to output. The +5V USB power from the PC is brought out to a red banana jack and the +5 power to the target is brought out to a black banana jack. A DMM in current measuring mode can then be connected to the two binding posts and used to measure the current consumption of the USB device. 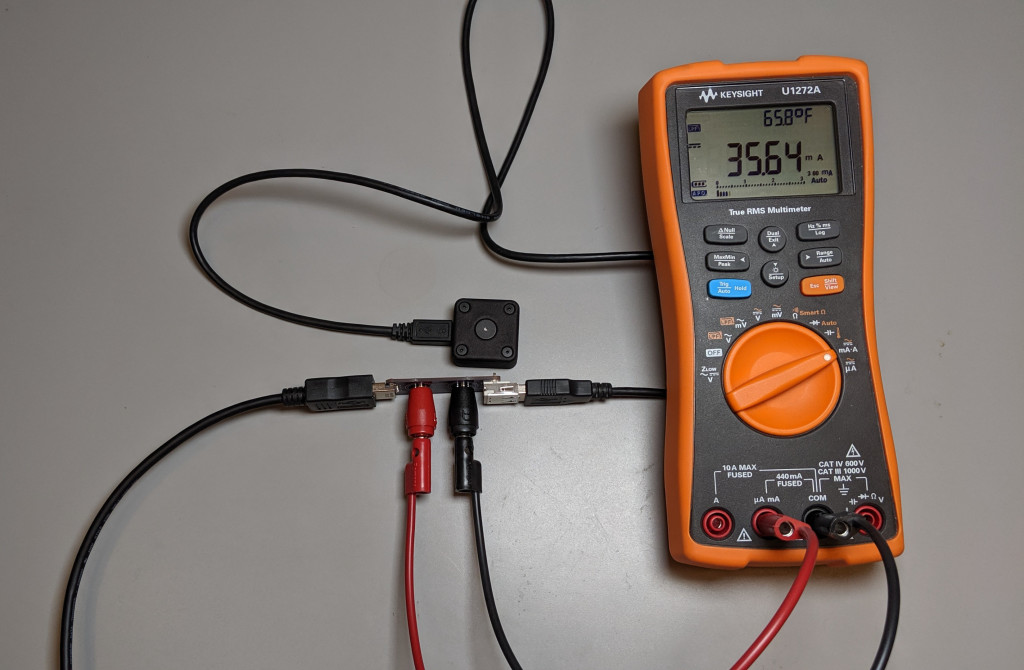 Current measurement with the buzzer on.

(Disclaimer: I work for Keysight. The E36312A was purchased through our employee discount program. The 34461A and U1272A were purchased at full price before my employment there.) 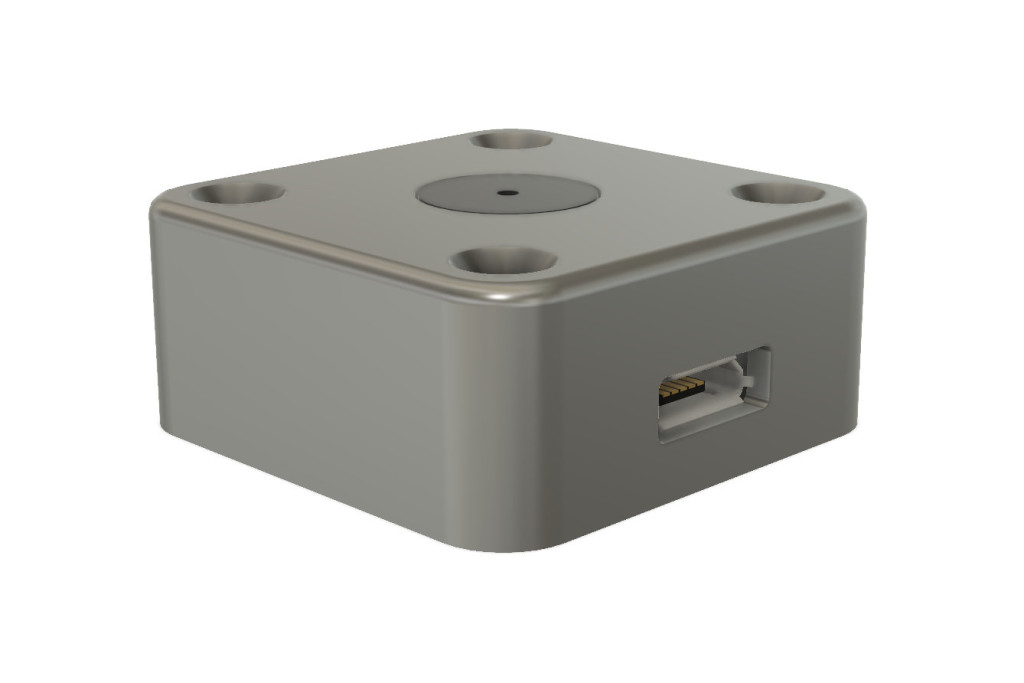 The one-key USB keyboard enclosure modified for the buzzer.

I need to place a button and LED on the board and make them accessible from the bottom of the enclosure so that I can implement a USB bootloader for updating the buzzer firmware. I also need to add a Nexperia PRTR5V0U2X ESD protection diode to the USB D+ and D- data signals.

Breaking Update: The improvements have been made! They’re described in this post.

All of the design files for this project can be found in the project’s repository on Github.