After completing my first BeagleBone Black + FPGA project and tutorial where I drove a single 32×32 RGB LED matrix, I decided it was time to go bigger. The result is the project shown below—a 3 x 2 matrix of 32×32 RGB LED panels. That’s 6,144 RGB LEDs or 18,432 LED chips—each of which can be controlled with 12-bit color at a refresh rate of 200Hz. Let’s take a closer look at the steps required to move from driving one panel to driving six panels.

Here is a video on YouTube of the six panel project in action. The first step was to build a frame to mount the panels. I used a set of calipers to locate each mounting hole and determine the clearance required for each of the connectors on the LED panels. I drew the frame using the free front panel design software from frontpanelexpress.com. I added holes to mount the BeagleBone Black and a 60W +3.3V power supply. Once I had the basic layout completed, I decided to use 20mm x 40mm aluminum extrusions to give the panel some depth to hold the electronics behind the frame and panels. I finally had the frame and two wall mounting brackets fabricated at frontpanelexpress.com.

The Verilog needed some changes to drive the increased number of panels:

These changes were relatively quick and easy to make. A few simulations and a run through the Xilinx ISE tools yielded a new bit file ready to drive up to six panels.

Below are some photos and here is a video of the six panel project in action. 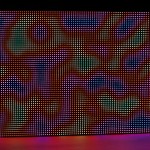 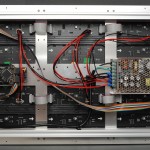 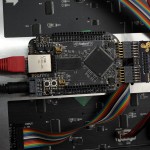 BeagleBone Black CPU board, LogiBone FPGA board, and PMOD-to-panel adapter board. 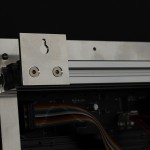 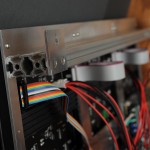 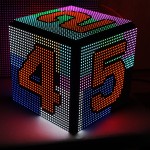 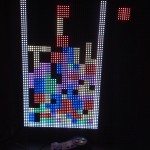 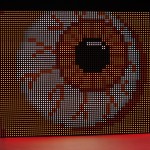 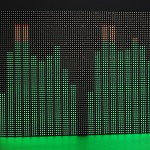 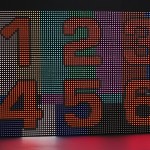 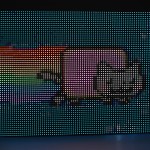 Source code for the FPGA, the software, and the frame design are available in my github repository.